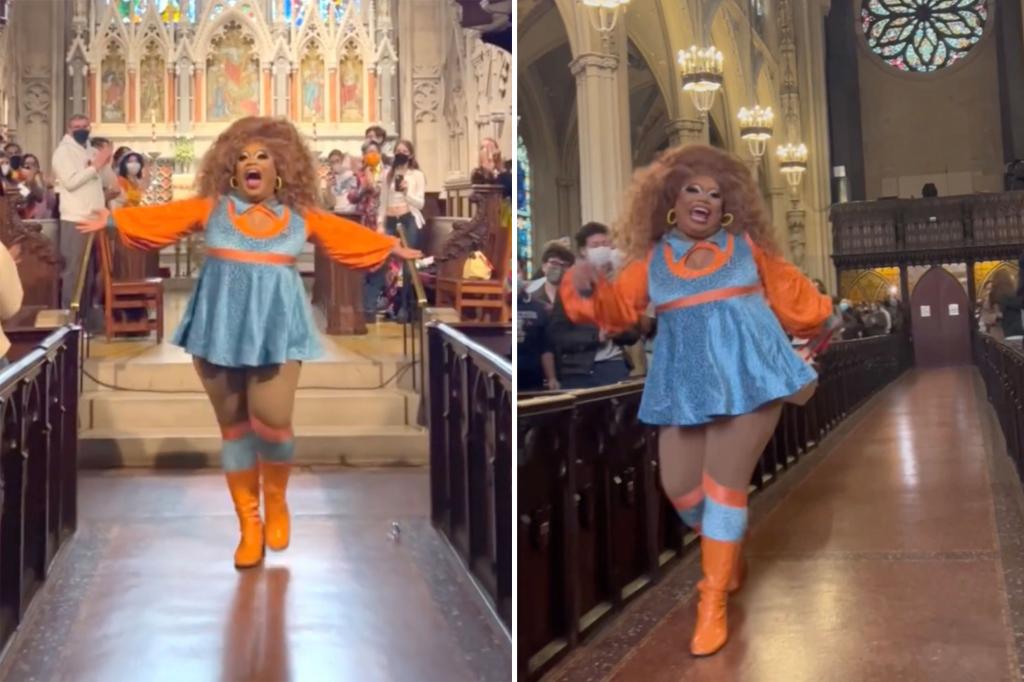 Students at a ritzy Manhattan private school were reportedly forced to attend a drag show at church as part of its LGBTQ+ pride celebrations earlier this year, according to a report.

The event was sponsored by the school and organized with the help of the students and faculty advisors in Spectrum — the high school’s LGBTQ+ support club.

Brita, whose real name is Jesse Havea, performed a rendition of “Somewhere over the Rainbow.” The artist then sat down with the school’s queer Director of Vocal Music, Andrew Leonard, to answer students’ questions about drag performing, queerness and the importance of pride, according to the school.

Video posted on TikTok shows Brita entering the back of the church in full drag, dancing up the aisle in a short-cut orange and blue dress and matching go-go boots as students clapped and cheered him on from the pews.

“I literally went to church to teach the children today,” the performer wrote in the video caption. “A Catholic High School here in NYC invited me to their Pride Chapel. Visibility matters and I’m so honored to have had the chance to talk to you about my work as an LGBTQ+ Drag Queen Activist.”

In another clip of the performance posted to Instagram, Brita — who was a contestant on Season 12 of “RuPaul’s Drag Race” — can be seen singing a rendition of the classic “Wizard of Oz” tune, dancing up and down the aisle and up to the altar while students stood and watched.

“Who said you can’t have a drag queen at church? Would you go to this service? Brita wrote in the post, adding it was a great experience to hear “the beautiful brave queer stories and songs from your students and faculty.”

“I will never forget this beautiful moment,” the performer concluded.

While students appear to be enjoying the unique church performance, some students said they felt pressured into participating.

“There was tons of social pressure to dance along and pretend like it was normal for sure,” a student who wished to remain anonymous Canadian told the conservative online magazine The Post Millennial, “whether it be people tapping on shoulders and telling them to stand up or just a collective staring contest at whoever wasn’t totally participating.”

One student told the outlet that as Havea approached the altar, he was joined by more dancing students, some of whom started “twerking.”

“I wondered, is this really happening in a chapel?” the student said.

Another student said there was “tons of social pressure to dance along and pretend that this was normal for church.”

Following the performance, students were able to talk about gender identity and other LGBTQ+ issues and share their own experiences with Havea and their classmates.

During this portion of the event, non-binary Grace Schools teacher Teacher Uyen Nguyen announced that they would be resigning from the school after being misgendered, students said.

Nguyen, who reportedly referred to themself as “The Gay Agender Teacher Nguyen,” told the chapel “how much they loved the gay kids at school, and how this has been the most inclusive and accepting place they’ve ever been, but it’s the administration she cannot work with.”

They had told the student newspaper a month earlier that while students had been accepting of their pronouns and identity, there needed to be additional training for faculty whose misuse of their preferred pronouns was a “stressor” this year.

Later on June 3, the Grace Schools hosted two other LGBTQ events to celebrate Pride Month. A program for Middle School students featured guest speaker, Joanna McClintick, who read from her new book, “Twas the Night Before Pride,” about the history of Pride Month.

On June 7, the school held its first ever Pride Chapel event for its lower school, in which Grace Church Schools’ Chaplain Reverend Mark Hummel began the service by sharing a few words on the importance of Pride. Students also learned about the history of the rainbow-colored Pride flag and sat through a read of “Twas the Night Before Pride” with their parents.

“Pride Chapels, along with the other history and identity-based chapels and assemblies held throughout the year, help empower Grace students to foster a safe and welcoming place for all, in which the diversity of our school is celebrated and lifted up.” the school said about the events.

The school did not immediately respond to an after-hours voicemail left with the school’s communications office on Wednesday.