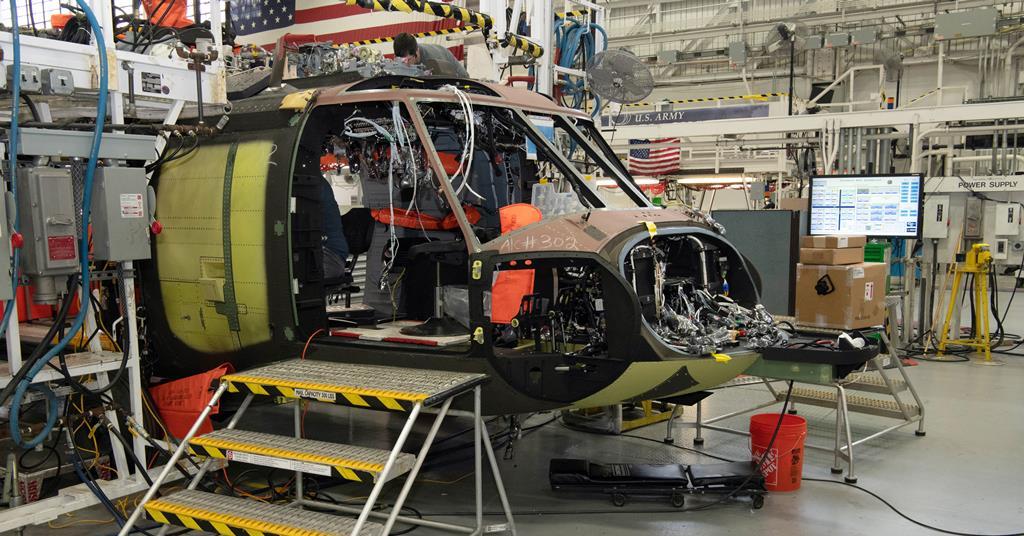 Nestled in a river valley just down the road from one of the oldest cities in America, a pioneer in aviation is looking toward the industry’s future.

With backing from parent Lockheed Martin, helicopter stalwart Sikorsky has invested some $1 billion in its Connecticut manufacturing plant in recent years, equipping the facility with advanced digital technologies as part of a bid to produce the US Army’s next generation of helicopters.

“Nothing here happens by accident,” says George Mitchell with a chuckle.

I would know. Sikorsky’s bespectacled vice-president of operations has been with the company for some 40 years – joining in the 1980s to work on the ultimately canceled RAH-66 Comanche project.

Within Sikorsky, Mitchell is informally known as the largest of the 99-year-old company’s headquarters and sprawling production facility in Stratford, Connecticut. The site still contains the original office of Igor Sikorsky, the father of rotary aviation and the company’s founder and namesake. 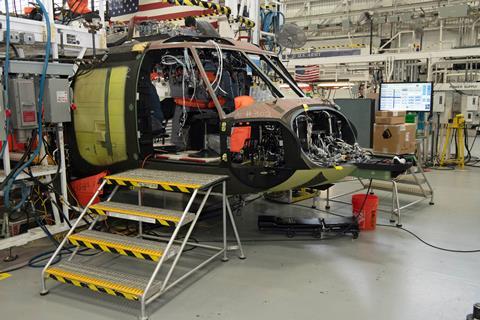 Stratford is Sikorsky’s past, but executives like Mitchell and president Paul Lemmo are betting it will also be the company’s future. The plant now has its own supercomputer, 3D-printing lab and an array of simulators that allow engineers and pilots to test aircraft that are not yet built.

The executive team calls it a digital factory, and they say the concept will reduce production costs, streamline maintenance and secure Sikorsky’s offer for the US Army’s ground-breaking Future Vertical Lift (FVL) contest.

At present FVL is focused on two aircraft: a replacement for the 40-year-old UH-60 Black Hawk, still made by Sikorsky in Stratford, and for the retired Bell OH-58 Kiowa Warrior reconnaissance helicopter.

The UH-60 has been the backbone of Sikorsky’s business for decades. The company says the 5,000th Black Hawk will roll off its production line in the fourth quarter of 2022.

While Sikorsky has secured other major contracts, including production of the US Marine Corps’ (USMC’s) CH-53K King Stallion heavy-lift helicopter and the US Air Force’s HH-60W Jolly Green II combat rescue helicopter, Lemmo acknowledges failure to secure an FVL contract would likely mean reductions to the Stratford plant’s 6,500-person workforce.

However, Lemmo and Sikorsky have no intention of that happening, which is why, Mitchell says, nothing at Stratford happens by accident.

Leading the way through a set of double doors and past a display of Igor Sikorsky’s famous fedora, Mitchell walks onto the factory floor. Speaking through headsets over the din of industrial activity, he is more likely to use words like “machine learning”, “data input” and “virtual reality” than terms typically associated with the manufacturing industry.

“You’re almost better off being a video gamer than machinist,” Mitchell quips, half-joking.

Through the double doors and at the end of a long, brightly lit, white-painted hallway sit a cluster of encased machines, some nearly the size of a single-storey building. These are the milling machines used to produce aircraft components, but they are a far cry from the lathes and mills of 20th century production lines.

Although they are not proprietary equipment, the milling machines have been built specifically for Sikorsky by companies around the world. Mitchell calls them “magic machines” because a single mill can automatically shape, turn and drill a raw material into aircraft parts – an operation that in previous eras would have required multiple machines and human operators.

The goal of the entire digital factory concept is to decrease the cost of labour, increase precision and cut production times. What once required multiple days of work on several mills can now be completed in just 10-15min by one of those magic machines, and with fewer errors.

The error tolerance on a component like a transmission gearbox, which contains dozens of various sized holes and surfaces, is a scant seven-millionths of an inch.

Precision is a pillar of Sikorsky’s cost-savings strategy. The Stratford plant has its own 650sq m (7,000sq ft) 3D-printing lab. The 18 printers on-site produce a variety of thermoplastic parts, including work tools and aviation components. Sikorsky expects delivery by year-end of two new printers that will be able to produce metallic components. 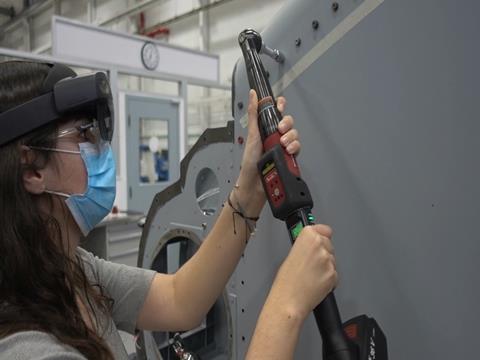 Bob Perchard, Sikorsky’s director of manufacturing engineering, says their printed parts now reliably pass quality control at a rate of 100%. A component that once required 4.5kg (10lb) of raw material to build using conventional tooling now only needs 1.3kg. Importantly, parts that may once have required assembly out of four or five subcomponents can now be printed as one solid piece.

The technology has matured to where Sikorsky says it can produce metallic structural components this way.

Where workers are still performing traditional manufacturing tasks like tightening rivets, Sikorsky has invested heavily in technologies to make the process faster, easier for technicians, and more reliable.

On the CH-53K production line, there are no paper schematics, hand tools are digitally integrated and workers are aided by augmented-reality goggles.

Sikorsky’s internal IT department took off-the-shelf torque wrenches and enabled them with wi-fi. Augmented-reality goggles show workers which rivets need to be tightened, and in what order. When placed in the proper spot, networked wrenches automatically tighten rivets to correct specifications and log the work, for quality control.

Now that process has been streamlined dramatically. Perchard says the new process is so simple it has been mastered by employees on their first day of work.

High-tech manufacturing can save costs on the so-called “back end” of building aircraft, but Sikorsky also made substantial investments on improving the design process, what it calls the front-end transformation.

This has come in the form of a $10 million on-site supercomputer and a bank of simulators that allow engineers and pilots to virtually test aircraft designs without having to build expensive prototypes.

Two banks of more than 25,000 core processors make up the supercomputer. For comparison, a laptop or desktop computer typically has one or two cores. The supercomputer powers flight simulators and digital models of aircraft, allowing designers to explore how proposed designs perform under different atmospheric and flight conditions.

The computer can intricately model complex variables like fluid dynamics around rotors and physical stresses on airframes. The flight simulators can incorporate working models of aircraft mechanical systems that react to pilot actions in real time. This allows engineers to understand how designs will actually perform in the physical world, without having to build entire aircraft, says Mike Ambrose, Sikorsky’s vice-president of digital transformation and the company’s former chief engineer.

Eventually, Sikorsky hopes its computer models will be powerful enough to incorporate the impact of more nuanced variables, such as the effects of operating in sandy environments.

Not only does that kind of “virtual flight” substantially reduce the risk for test pilots, it can also massively lower the cost of correcting design issues; what Ambrose calls the “fly-fix-fly” cycle.

Traditionally, when a design issue was identified, engineers and test pilots would develop potential solutions and actually build that change into their prototype, without any guarantee it would solve the problem and not create new ones. That fly-fix-fly cycle can quickly result in cost overruns and delays, says Ambrose.

He gives the example of a problem on an earlier design of the CH-53K that was identified during testing. That iteration was producing what is known as engine exhaust interaction. Essentially, exhaust from one engine was being drawn into the intake of another engine, rather than clear air.

Sikorsky was able to use the supercomputer to model changes to the design, rather than physically modifying the prototype, and identify a solution. Ambrose says using a virtual redesign saved two years and millions of dollars compared to the fly-fix-fly method.

While digitally backed design and manufacturing can lower costs and reduce build times, Sikorsky’s true bet for the contracts is a concept it calls the digital pedigree, executives say.

The idea is that each aircraft rolling off Sikorsky’s production line will have a “digital twin” associated with its tail number. Anything and everything that happens to the helicopter will be reproduced in that aircraft’s dedicated digital twin.

The process starts on the factory floor and continues when the aircraft reaches operational status. All actions during flight are recorded and logged by on-board sensors; maintenance is logged, too. Ideally, this gives mechanics a highly granular view of the stresses being placed on individual components within the airframe.

Data from on-board sensors, feeding the digital-twin model, are also helping develop an algorithm to predict mechanical problems at the aircraft-specific level.

This virtual chain running through the entire lifespan of an individual helicopter is what Sikorsky calls the “unbroken digital thread”, from concept design to real-world operations. 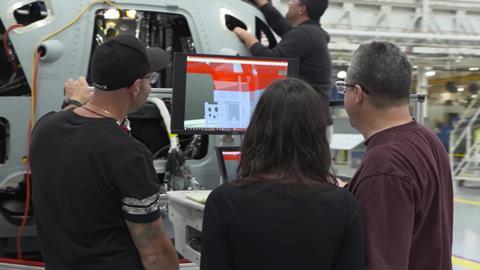 While the company is betting this model will secure it the army’s contracts, which could be worth billions of dollars per year according to the Congressional Budget Office, the concept is already being rolled out for the USMC’s CH-53K.

“We’re not talking about it, we’re doing it,” says Lemmo.

He adds that Sikorsky’s Stratford plant is staffed and ready to begin producing the first aircraft, known by the army as the Future Long Range Assault Aircraft (FLRAA), that will replace Sikorsky’s long-serving UH-60.

UH-60 production for the US military will end in 2027. Sikorsky hopes to mitigate that loss with foreign military sales.

Sikorsky, in partnership with Boeing, has put forward its Defiant X for the FLRAA contest, which features a co-axial main rotor assembly and a rear-mounted pusher propeller for generating extra thrust and airspeed. It faces competition from Bell’s V-280 Tiltrotor Value.

The army is set to announce its choice for FLRAA in September, according to recent statements by chief financial officer Jay Malave.

The second requirement, the Kiowa Warrrior replacement, is for the Future Attack Reconnaissance Aircraft (FARA), where Sikorsky’s Raider X – using the same co-axial/pusher configuration – faces the Bell 360 Invictus. The army recently told FlightGlobal that test flights for the FARA designs will not occur until at least late 2023.