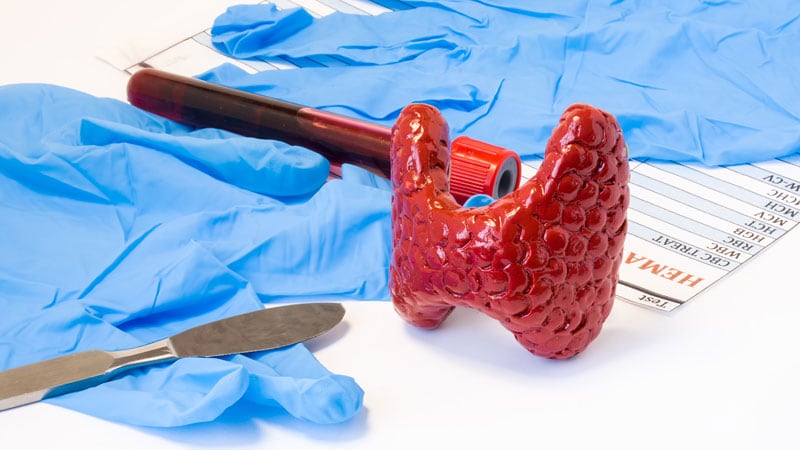 Patients who receive parathyroidectomy for mild primary hyperparathyroidism show no benefits in survival or morbidity, including fractures, cancer, or cardiovascular outcomes over more than 10 years, when compared with those not receiving the surgery, results from a randomized, prospective trial show.

“In contrast to existing data showing increased mortality and cardiovascular morbidity in mild primary hyperparathyroidism, we did not find any treatment effect of parathyroidectomy on these important clinical endpoints,” report the authors of the study, published this week in the Annals of Internal Medicine.

“Over the years, more active management of mild primary hyperparathyroidism has been recommended, with a widening of criteria for parathyroidectomy,” they write.

“With the low number of kidney stones (n = 5) and no effect of parathyroidectomy on fractures, there may be a need to evaluate and potentially revise the current recommendations.”

The authors of an accompanying editorial agree that “the [results] provide a strong rationale for nonoperative management of patients with mild primary hyperparathyroidism.”

“The findings suggest that most patients can be managed nonoperatively, with monitoring of serum calcium levels every 1 to 2 years or if symptoms occur,” write the editorial authors, Mark J. Bolland, PhD, and Andrew Gray, MD, of the Department of Medicine, University of Auckland, New Zealand.

Although parathyroidectomy is recommended for the treatment in patients with hyperparathyroidism with severe hypercalcemia or overt symptoms, there has been debate on the long-term benefits of surgery among those with milder cases.

Most previous studies that have shown benefits such as reductions in the risk of fracture with parathyroidectomy have importantly not distinguished between mild and more severe primary hyperparathyroidism, the authors note.

No Significant Differences in Mortality Between Surgery, Nonsurgery Groups

For the Scandinavian Investigation of Primary Hyperparathyroidism (SIPH) trial, first author Mikkel Pretorius, MD, Oslo University Hospital and Faculty of Medicine, University of Oslo, Norway, and colleagues enrolled 191 patients between 1998 and 2005 in Sweden, Norway, and Denmark, who were aged 50-80 years and had mild primary hyperparathyroidism, defined as serum calcium levels of 10.42-11.22 mg/dL.

Participants were randomized to receive surgery (n = 95) or nonoperative observation without intervention (n = 96).

After a 10-year follow-up, 129 patients had completed the final visit. The overall death rate was 7.6%, and, with eight deaths in the surgery group and seven in the nonsurgery group, there were no significant differences between groups in terms of mortality (HR, 1.17; P = .76).

During an extended observation period that lasted until 2018, mortality rates increased by 23%, but with a relatively even distribution of 24 deaths in the surgery group and 20 among those with no surgery.

In terms of morbidity, including cardiovascular events, cerebrovascular events, cancer, peripheral fractures, and renal stones, there were 101 events overall, with 52 in the parathyroidectomy group and 49 in the nonsurgery group, which again, was not a significant difference.

Sixteen vertebral fractures occurred overall in 14 patients, which were evenly split at seven patients in each group.

There were no between-group differences in terms of time to death or first morbidity event for any of the prespecified events.

Of the 96 patients originally assigned to the nonsurgery group, 17 (18%) had surgery during follow-up, including three for serious hypercalcemia, three by their own choice, two for decreasing bone density, one for kidney stones, and the others for unclear or unrelated reasons.

Study limitations include that only 26 men (13 in each group) were included, and only 16 completed the study. “The external validity for men based on this study is therefore limited,” the authors note.

And although most people with primary hyperparathyroidism are adults, the older age of participants suggests the results should not be generalized to younger patients with benign parathyroid tumors.

The editorialists note that age should be one of the few factors that may, indeed, suggest appropriate candidates for parathyroidectomy.

In addition, “patients with serum calcium levels above 3 mmol/L (> 12 mg/dL) are at greater risk for symptomatic hypercalcemia, and patients with a recent history of kidney stones may have fewer future stones after surgical cure.”

“Yet, such patients are a small minority of those with primary hyperparathyroidism,” they note.

The study authors underscore that “our data add evidence to guide the decision-making process in deliberative dialogue between clinicians and patients.”