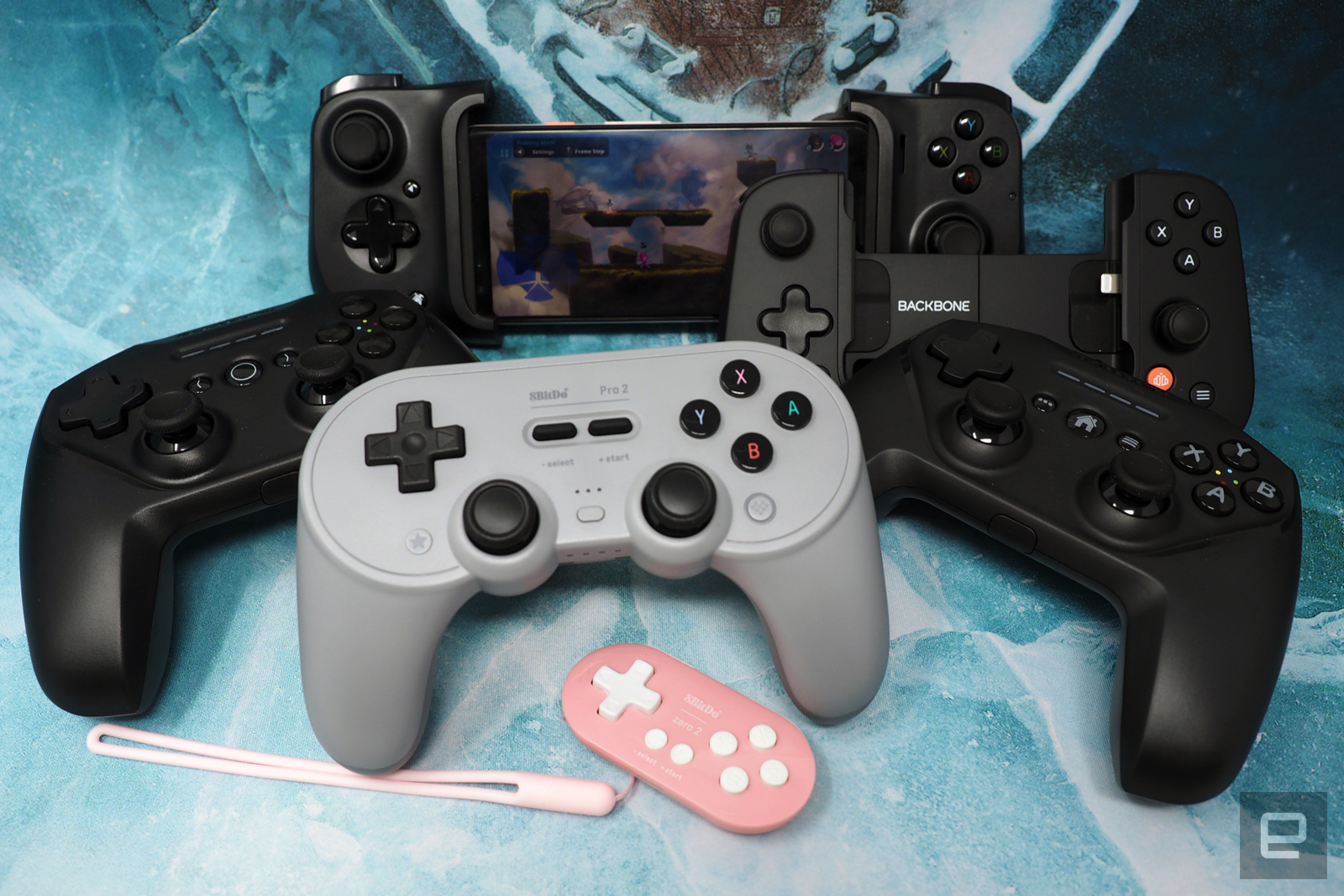 Mobile gaming is serious business now. The biggest titles out there are games like Fortnite and Genshin Impact, helped along by legions of kids getting their first smartphone. Lots of game publishers are putting out console-quality experiences on mobile, and it’s taken time for gaming accessories to catch up. But they have, and now players have a number of controller options to suit their play style. We’ve sorted through the leading options to highlight the pros and cons of each, so you can decide which one is the best for getting your game on (the go).

8BitDo has built itself a reputation for versatile gamepads that can work with multiple systems, from the Nintendo Switch to the Raspberry Pi. And while the Pro 2 is one of our top controllers for the Switch, it’s also a pretty great option for Android and iOS as well. The advantage to using these with your phone is also the free 8BitDo software that gives you extensive customization options for the buttons; it even has more options than you’ll find on Nintendo’s system. Of course, being a Bluetooth gamepad means it’s easy enough to jump back and forth, making this a good investment for people who own multiple portable devices (like a Switch).

Cons: Not small and would be best carried around in a case

For players who like Xbox-style controllers: SteelSeries Nimbus+ and Stratus+

While the PlayStation’s DualShock design has gained its share of devotees over the years, the Xbox gamepad is the stereotypical image of the gamepad in many people’s minds (as well as the Discord logo). So it makes sense that there are a lot more mobile gaming options with that shape, and the best ones come from SteelSeries: the Nimbus+ for Apple-made devices and the Stratus+ for Google-based devices (Android and Chromebook).

The two controllers are, for the most part, identical. They have shoulder buttons and triggers, the d-pad is the same, and they both include sturdy phone mounts for attaching your device at the top — the type that clamps in place automatically. Unlike a clamp from a more generic company, the one SteelSeries provides with both controllers won’t fight you during the process of mounting your phone.

Pros: More players are likely to be familiar with Xbox-style controllers; both models include sturdy clamps for clipping your phone to the controller.

Cons: You have to buy a different controller based on what OS you’re using; the controller with the clamp attached is unwieldy

For players who want to turn their Android phone into a Switch or Steam Deck-like device: Razer Kishi

Let’s be honest, the form factor is a big reason that devices like the Switch are so popular. They’re comfortable to hold, well-balanced and really put the screen front and center. You don’t really get that with a phone clamp or table stand. Luckily, Razer’s Kishi is a super affordable option that’s easy to slide your phone into — though the setup admittedly wasn’t as quick for me as the SteelSeries options. But at least the direct connection it forms with the phone using USB-C is faster than Bluetooth.

The Kishi’s biggest advantages — besides Razer’s high-end build quality — are its passthrough charging, so you never need to detach it to charge your phone, and the size it folds down to when you do take it off your device. It’s smaller than the SteelSeries controllers, making it ideal for throwing into a small bag.

Pros: Provides a direct connection to a phone instead of relying on Bluetooth; folds up compactly when not in use

For players who want to turn their iPhone into a handheld console: Backbone One

The USB-C port on the Kishi restricts it to Android devices, and Razer doesn’t make an iOS equivalent. However, the new Backbone One is made for Apple devices, though at a higher cost (due to being newer and from a smaller company). My colleague Mat Smith was a big fan of the One when he tried it, and in my own use it has a few advantages over the Razer device, namely a cleaner design and a more sweat-friendly matte texture. It also features Apple-specific buttons, ones that are much bigger and thus easier to hit than the ones on the Kishi.

Cons: expensive; only works with iPhones

For players who want the most portable controller possible (or the cutest): 8BitDo Zero 2

If you have big hands, the 8BitDo Zero 2 is definitely not for you, and your hands will likely cramp if you spend too long playing with this diminutive Bluetooth controller. But for everyone else, it’s definitely worth a look, if only because it’s so small there’s no reason to keep it on you at all times in case of an emergency. Not that we could tell you what constitutes a gaming emergency, but if one does come up you’ll be glad to have this on hand. It truly is keychain-sized, so you can clip it on your backpack or slide it into a Switch carrying case with ease. And we love the bright colors, which are based on the Switch Lite design and should blend in with your spring and summertime apparel.

Pros: Cute and tiny; comes with a strap for attaching to a bag

Cons: Too small for gamers with big hands

All products recommended by Engadget are selected by our editorial team, independent of our parent company. Some of our stories include affiliate links. If you buy something through one of these links, we may earn an affiliate commission.