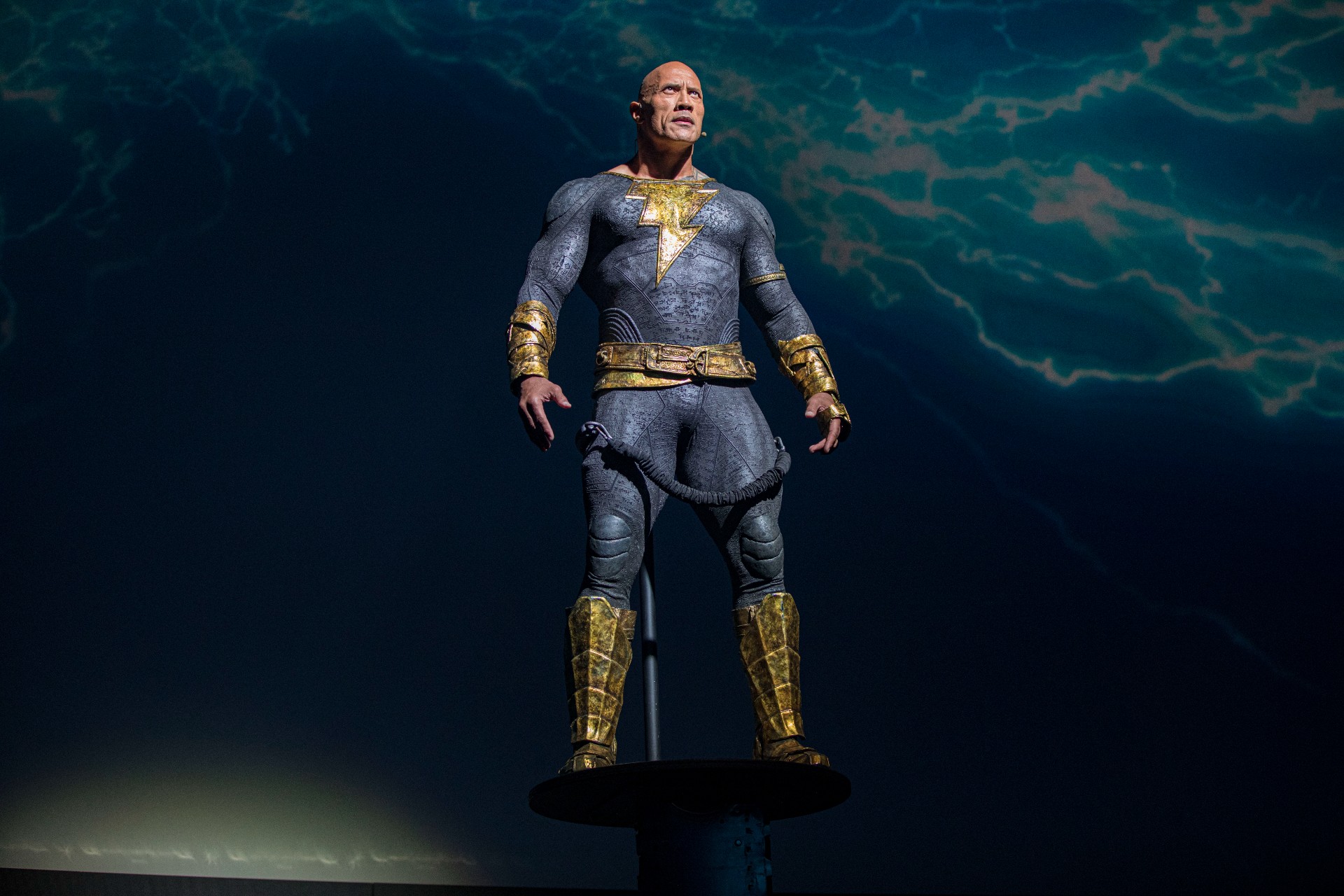 San Diego Comic-Con is officially over, but its mark is well branded on the pop culture landscape. After a two-year absence, the famed convention returned better than ever. Fans brought out their best and most wildly imaginative cosplays, and every major studio came to play, from Paramount to Disney. Comic-Con 2022 delivered a slew of breaking announcements, teases, and first looks, making social media explode in anticipation.

DC, Netflix, and even Amazon brought out their hottest new projects. Marvel was the king of the convention, presenting its entire slate of films for Phase 5 and teasing the next two entries in the avengers series. And although Disney saved many of its most exciting announcements for September’s D23, Marvel Studios delivered enough surprises to prove once again it is the undeniable champion of Hall H. In short, San Diego Comic-Con 2022 was an overwhelming success, building buzz for every project it showcased and reminding everyone why it’s still the apex of pop culture.

When Paramount announced a Dungeons & Dragons film, the internet moaned and raised a skeptical eyebrow. The project seemed like a shameless cash grab at best and a trainwreck waiting to happen at worst. After all, the first attempt to turn this beloved franchise into a feature film resulted in a truly awful box office flop that bore little to no resemblance to the role-playing game millions of fans know and love. However, the cast gathered on the opening day of SDCC 2022 and debuted the first trailer for the film. And what do you know? It looks quite promising.

Headlined by the always charming Chris Pine, with Michelle Rodriguez, Bridgeton‘s resident Regency hunk Regé-Jean Page, and a sure-to-be scenery-chewing Hugh Grant, the film looks like the perfect blend of action, adventure, and comedy. The VFX look solid, and while the premise is as clichéd as they come, the cast seems to be in on the joke and doing their darndest for our entertainment. Dungeons & Dragons: Honor Among Thieves is exactly the type of project that shines at Comic-Con, and everyone at the panel sold the hell out of it.

Surprisingly, the film’s best moments happened outside of the Con, thanks to its unique activation, arguably the best at the convention. An old-fashioned tavern showcasing videos of the cast, singular drinks, and a dragon animation complete with smoke effects welcomed fans outside the Convention Center. Visitors described the experience as fascinating and fun, earning the upcoming project considerable goodwill. Paramount is on a roll, and it clearly has faith in Dungeons & Dragons to become its next big franchise. Could it succeed? The film will be released on March 3, 2023.

Amazon’s The Lord of the Rings: The Rings of Power is the streamer’s shameless attempt at securing its own game of Thrones. The show has received a mostly lukewarm reception so far, but Comic-Con helped it build considerable hype thanks to an astonishing new trailer featuring nearly every major player and detailed insight into the show’s worldbuilding and requisite production values. The Rings of Power will premiere in a considerably different world than the one in which Peter Jackson debuted his now-iconic trilogy; can lightning strike twice for this masterpiece of literary fantasy?

The trailer had a positive reception from attendees at the Con, who celebrated the return to Tolkien’s Middle-earth. It’s also performing quite well on YouTube, although many fans still seem skeptical about the show and what to think of it — a quick look at the comments section will make that clear. The Rings of Power benefitted from a lack of competition at the Con—only House of the Dragon stood in its way. Still, the show had a strong presence at Comic-Con, generating enough buzz to cement itself as a genuine player in the streaming wars and a worthy contender for the crown that game of Thrones left behind, which shows like The Witcher and The Wheel of Time have been unable to claim.

House of the Dragon is HBO’s most promising new show. Expanding upon George R. R. Martin’s A Song of Ice and Fire, the show will focus on the Targaryen dynasty, particularly the event that led to their decline and eventual exile from Westeros: the Dance of the Dragons. Comic-Con 2022 saw the release of a new trailer featuring even more story, more houses, and more of the undeniable stars of the show: dragons! Fan-favorite Matt Smith was in attendance, and he does not appreciate your Morbius jokes.

Following the disappointing ending of game of Thrones and the bittersweet it left in fans of the show, House of the Dragon you have a considerable battle ahead. Can it restore audiences’ fate in Westeros, or did G.O.T. ruined all chance for a reconciliation? The show promises to have everything that made thrones famous—violence, political intrigue, superb production designs, incest. Dragons.

Yes, the wigs are very questionable, but the trailer that debuted at Comic-Con brought the house down. Fans still love Westeros and what it represents, and it shows. The series received a warm reception at the convention, arguably surpassing its main competition, Amazon’s The Rings of Power.

House of the Dragon also challenged Dungeons & Dragons for the best activation crown by featuring an experience where fans could participate in a dragon-hatching ceremony. Experiencing first-hand what it means to be a true Mother of Dragons, visitors at the activation hatched a dragon egg and could even pose and take pictures with a life-size replica of the Iron Throne. Nice! Only time will tell, but the Targaryens seem on their way to conquering television again.

Let’s get this out of the way: DC had a lackluster panel. With the scandal surrounding cast members of Flash and Aquaman movies, DC opted to focus on its two upcoming projects, Black Adam and Shazam! Fury of the Gods. However, neither project is particularly hot, at least not out of the gate. Alas, it’s never wise to bet against Dwayne Johnson, a showman at heart who knows how to sell his movies about him.

The former wrestler brought the house down by making a lightning-fueled entrance at Hall H dressed as Black Adam. Like many other memorable moments at Comic-Con, Johnson took full advantage of the setting and the audience, feeding their fantasies with an elaborate light show that did considerable work to sell the picture before so much as a trailer had screened for attendees. The trailers were alright, but Johnson’s showmanship was the real magic that won over DC fans.

Still, the real conversation was Henry Cavill’s absence from the Con. dead line hinted that the actor would make a surprise appearance at the DC panel to discuss Superman’s future in the DCEU, and fans went wild with theories. Could it be a cameo in Black Adam leading up to an all-out confrontation in an upcoming project? Or, dare they dream, a sequel to 2013’s Man of Steel? The possibilities seemed endless. Alas, Cavill didn’t appear, leaving fans disappointed, angry, and perhaps a tad brokenhearted. Whatever happened to the Man of Tomorrow?

To the surprise of no one, Marvel Studios ruled Comic-Con 2022. Acting as the piece of resistance, the juggernaut studio brought out the big guns for its Saturday presentation. Kevin Feige presents the entire slate for Phase 5, which will begin with Ant-Man and the Wasp: Quantumaniascheduled to premiere on February 17, 2023, and conclude with the release of Thunderboltsscheduled for July 2022, 2024.

If that wasn’t enough, Feige also revealed three projects from Phase 6! Kicking off the phase will be “Marvel’s First Family,” the Fantastic Four, whose long-awaited MCU movie (let’s just forget those awful Fox versions with Jessica Alba and Miles Teller) will release on November 8, 2024.

The Avengers will then reassemble for two new adventures; in a weird turn of events, the series will pull a The Matrix Reloaded/The Matrix Revolutions and premiere Avengers: The Kang Dynasty and Avengers: Secret Wars in May and November 2025, respectively. Feige also announced a new series for the Man Without Fear, titled Daredevil: Born Again, and included teases for other Disney+ projects, including Secret Invasion.

Still, the panel’s highlight had to be the first trailer for the highly-anticipated Black Panther: Wakanda Forever. Starring an ensemble presumably led by Letitia Wright and including Lupita Nyong’o, Winston Duke, Martin Freeman, and Angela Bassett, Wakanda Forever will deal with the aftermath of T’Challa’s death. The film has been surrounded by intense speculation and fan interest following Chadwick Boseman’s tragic passing, but the trailer promises one of the best films in Marvel history and the highlight of an uneven Phase 4.

The trailer also featured the first look at Tenoch Huerta’s villainous Namor, the Sub-Mariner — a character who will act as a milestone in Latino representation –, and Michaela Coel’s Aneka. Accompanied by a remix of Tems’ cover of Bob Marley’s No Woman, No Cry and Kendrick Lamar’s alright, the trailer is emotional, epic, and promising; in short, it’s everything we’ve come to expect from a talent like Ryan Coogler. Although competition was stiff, the first look at Black Panther: Wakanda Forever was impossible to resist and the best and most meaningful part of the 2022 edition of San Diego Comic-Con.