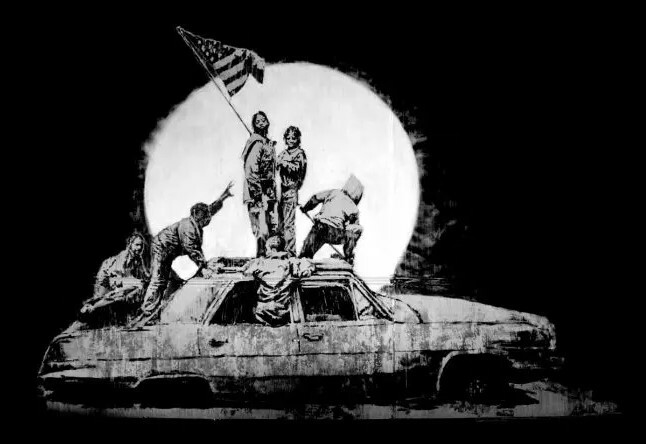 Banksy, the world’s most famous, yet somehow most anonymous, street artist is the subject of a new exhibition in the City of London this month. It will be the debut show at Red Eight Gallery at The Royal Exchange and will feature prints of some of his most instantly recognizable works by him, including ‘Girl with a Balloon’ and ‘Happy Choppers’. The gallery describes Banksy as ‘the most controversial, interesting, and talked-about artist in modern history’, and mMost of the works are unsigned and editioned in numbers like 500, though included in the show are ‘Laugh Now’, a one-off original stencil on aluminum work, and signed versions of ‘No Ball Games’ and ‘Christ with Shopping Bags’ .

And how much will one of these masterpieces set you back? Well, prices range from £25,000 to £2.5million. £25,000 for an unsigned edition in a run of 600 might sound like a lot, and that’s because it really, really es. But it’s a Banksy exhibition in the center of the UK’s financial district, you don’t think those first five letters of his name are an accident do you? They’ve literally called the exhibition ‘Banking on Banksy’.

Want more art, but for free? Here are the best free shows in London.