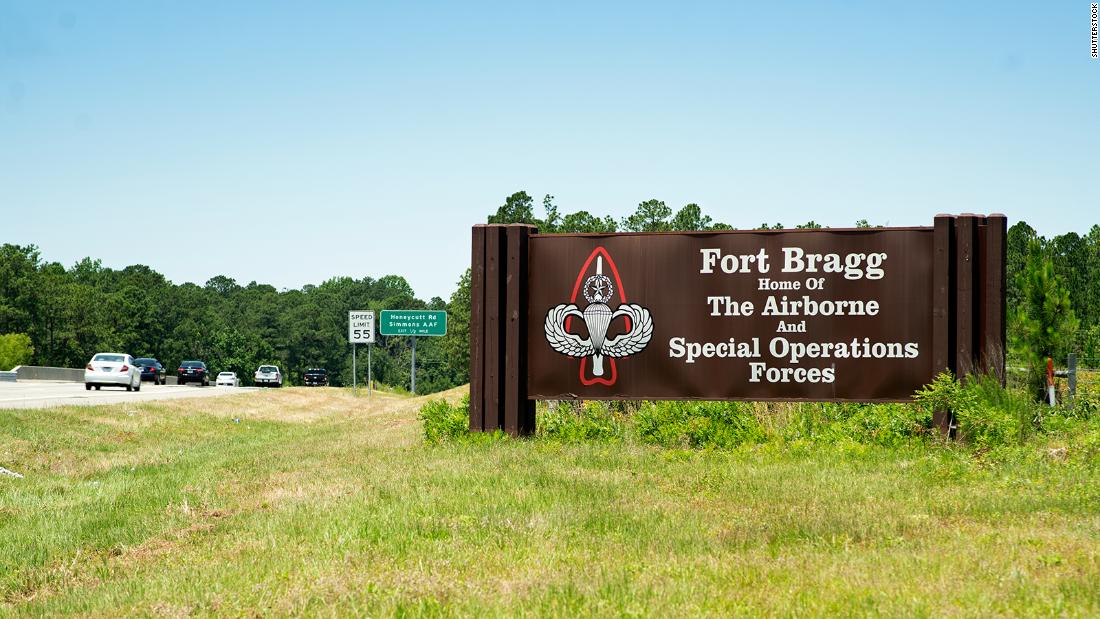 The proposed names include women, African-American, Native American and Latino service members, as a nod to the diverse ranks the US military has benefited from over the years. The commission, however, also recommended renaming a few of the bases after White men.

The renaming of bases with Confederate monikers became a hot button political issue in the final months of the Trump administration, when then-President Donald Trump blasted the idea, accusing others of wanting to “throw those names away.”

Trump had vetoed the 2021 National Defense Authorization Act, which included the Naming Commission, but in the waning days of his administration, Congress delivered its first and only veto override during his tenure, approving the legislation with overwhelming bipartisan support.

The naming commission solicited suggestions for possible new names to the US Army bases through a public website. They received more than 34,000 submissions for possible names to rename the bases, Brig. Gen. Ty Seidule, US Army, Retired, Vice Chair of the Naming Commission said during a roundtable on Tuesday.

From the 34,000 suggestions, the commission narrowed the list to 3,670 names as possible contenders, then down to 87, and finally to the list of recommendations they released today.

“Every name either originated from or resonated with the local communities. The feedback we received assisted us in narrowing the options and proved vital in helping us reach our final recommendations,” Seidule said.

“Today’s announcement highlights the commission’s efforts to propose nine new installation names that reflect the courage, values, sacrifices, and diversity of our military men and women,” Austin said in a statement.

Austin will have the final say on the renaming of bases and the commission’s final recommendations to Congress are due on October 1.

Here are the nine bases that could have their names changed.

The commission suggested changing the name of Virginia’s Fort AP Hill, named after Lt. Gen. Ambrose Powell (AP) Hill, a Confederate commander, to Fort Walker. Dr. Mary Walker was the Army’s first female surgeon and was ultimately awarded the Medal of Honor for her service during the Civil War.

“Dr. Mary Walker’s service to the nation, perseverance over significant obstacles based on her gender, and lifelong fight for equality serve as an example and inspiration for all Americans,” the commission said in a release.

Fort Polk in Louisiana, named after a Confederate commander, Lt. Gen. Leonidas Polk, could become Fort Johnson in honor of Sgt. William Henry Johnson. The African American soldier is considered one of the first heroes of World War I after he fought off about two dozen Germans alone, killing at least four. He was later posthumously awarded the Medal of Honor.

“His story embodies an indomitable will to win against all odds, the sacrifices borne by our soldiers, and the many heritages of our military heroes,” the release said.

North Carolina’s Fort Bragg, one of the largest military installations in the world, could be named Fort Liberty, according to the commission’s recommendations, the only one of the facilities named after an American value instead of an individual or group of people.

Gen. Braxton Bragg was a popular Confederate general who garnered a lot of criticism for his often subpar performance on the field, accompanied by a hot temper and combative personality.

Fort Benning in Georgia could be renamed Fort Moore after Lt. Gen. Hal and Julia Moore. Hal Moore served in the Army between 1945 and 1977, with assignments in Japan, Korea, Norway and Vietnam.

His wife, Julia, “worked with the American Red Cross, and advocated for continued support for military families, including childcare and quality-of-life opportunities and initiatives relied on and refined upon by families to this day,” according to the release.

Georgia’s Fort Gordon could become Fort Eisenhower after General of the Army Dwight Eisenhower, who went on to serve as the nation’s 34th president.

The commission said in its release that the late President’s “extensive, innovative, and effective military experience and leadership shaped our modern world. His career demonstrated superlative devotion to duty, executing those duties with an eye on history and personal experience adapted to new circumstances. “

Fort Hood in Texas could be renamed Fort Cavazos after Gen. Richard Cavazos, who served in both the Korean War and Vietnam War.

“In 1982, he became the first Hispanic-American to pin on four stars,” the release said. “His final assignment of him as head of the US Army Forces Command fittingly summarized his career of service by placing him at the head of sustaining, training and deploying all the Army’s deployable forces.”

“Though Arthur Gregg and Charity Adams served on different missions and in different conflicts, consistent themes of leadership, dedication, and problem solving united their service,” the commission said. “Moreover, in overcoming the sustainment obstacles caused by war, they also helped overcome the social obstacles caused by segregation. Their service simultaneously supported mission success and societal progress.”

Meanwhile, Fort Pickett in Virginia could be renamed Fort Barfoot after Tech. Sgt. Van T. Barfoot, who served for 34 years, including in World War II, the Korean War and the Vietnam War.

The commission noted that Barfoot, who died in 2012, made headlines in 2009 “when he insisted on flying the American flag at his home, against the wishes of his local homeowners association.”

The commission also suggested Fort Rucker in Alabama should be renamed Fort Novosel after Chief Warrant Officer 4 Michael J. Novosel Sr., who served in World War II, the Korean War and the Vietnam War, where he flew 2,543 medevac evacuation missions, according to the release.

This story has been updated with additional details.