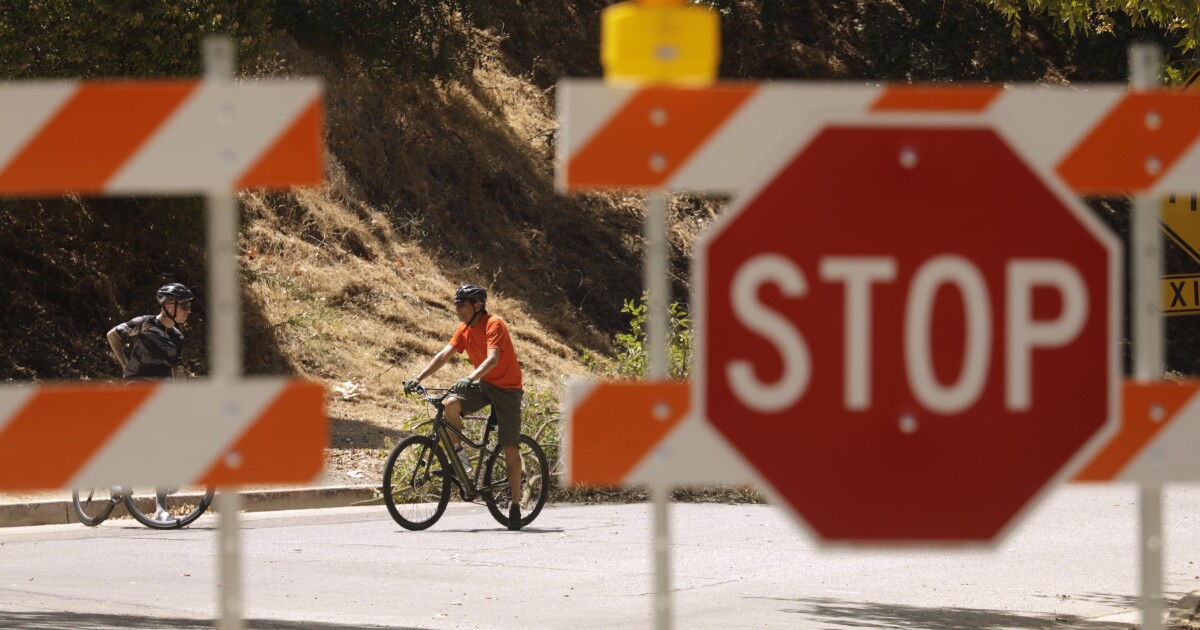 In the city where the car is king, activists are pushing to claim strips of the biggest boulevards for bicyclists and walkers.

Their fight has played out at Griffith Park, where streets were recently closed after a cyclist was killed. It spilled out along the steps of City Hall where advocates staged a die-in. And now, it could make its way to the ballot box in a vote that will test traffic-weary Angelenos’ willingness to put themselves on a so-called road diet to make streets safer and the air cleaner.

Los Angeles City Clerk Holly Wolcott cleared the way this week for a 2024 voter initiative that fast tracks the city’s own ambitious traffic plan to create hundreds of miles of more walkable and bikeable streets by implementing it every time roads are repaved. The Los Angeles City Council must now decide whether to send it to voters or adopt it outright.

As it is, the 7-year old city plan reworks some of Los Angeles’ most storied boulevards, adding bicycle lanes, building wider sidewalks, planting more trees and creating more visible crosswalks. Originally meant to be achieved over 20 years, the document offers a guide that can be modified over time to adjust to changing needs, city planners say. But the blueprint became bogged down by red tape among city departments, lawsuits and lack of political will in the face of many drivers who say it will cause more congestion by removing traffic lanes.

The city has met only 3% of its current goals, says Michael Schneider, a software entrepreneur who helms the advocacy group Streets for All, which birthed the plan.

If approved, the initiative would let any resident sue the city if it failed to comply, creating a headache for council members who already field complaints from some locals about bicycle lanes. And it could only be overturned by voters.

Around the globe cities have been rethinking the role of cars, shutting down streets, creating more room for bicyclists and pedestrians, reducing parking requirements for new projects. The changes come as traffic deaths have reached record highs across the country and the effects of human-induced climate change become more real.

“I think it will be the most significant change in Los Angeles since they started doing plans, because for the first time they actually will have to implement their plan,” said Schneider. “There’s a whole history back to the 1960s of Los Angeles having all of these great plans just collecting dust.”

But anything resembling road diets has historically caused an uproar in a region where traffic is a bane of existence.

After a teenager was killed near Dockweiler State Beach, the city scrambled to eliminate a traffic lane only to later reverse course in 2017 amid a wave of opposition due to tie-ups on the road. On the Westside, a bicycle lane that clogged up Venice Boulevard split many in the community. And in Eagle Rock, neighbors battled over a planned bus lane that will reduce a portion of Colorado Boulevard to one lane.

“If you take away vehicle lanes, you are creating congestion,” said Mike Eveloff, a board member of the nonprofit Fix The City. The group successfully sued Los Angeles over its mobility plan, mandating that an extensive outreach plan accompany new projects for 10 years. “This will result in even more lawsuits against the city. There are no disclosed costs. This represents a ‘hidden’ tax.”

Eveloff said he once loved to cycle but not anymore. “The infrastructure is incompatible with cars, bikes and pedestrians sharing the same space.”

Like many advocates, Schneider argues that the city’s car-centered culture thinks of bicyclists and walkers as an afterthought, and that is deadly.

In the first six months of this year, 78 pedestrians were involved in fatal crashes, up from 56 in the same period in 2021. If the pace continues, it will surpass the record highs hit in 2017 and 2019 when that number hit 136. So far this year, there have been nine bicyclists involved in fatal collisions.

A longtime bicyclist, Schneider, who comes from the world of tech startups, has taken a disrupter approach to his activism. But longtime mobility advocates are concerned his effort is a quick fix that could create more inequity in underserved communities. Advocates point out that even the process of getting streets paved can tilt toward more wealthy individuals who have the time or ability to push for street work.

“For those of us who work in transportation justice, there are always consequences from our transportation decisions and too often we frame them as unintended or unexpected consequences,” said Tamika Butler, the former executive director of the Los Angeles County Bicycle Coalition and a doctoral student at UCLA, “when in reality, had the process been more equitable or had people been thinking about equity more, those outcomes wouldn’t be so surprising, and in fact, they might just have been ignored intentionally.”

She singled out projects like the Sixth Street bridge, which was hailed early on as a beautiful infrastructure project that would connect the historic Eastside to downtown, but later exposed the need for public parks and more transit options.

Still, the initiative has sparked buzz among other advocates long frustrated by Los Angeles’ inaction. Schneider’s brash approach has forced City Hall to pay attention. And he’s gotten support from dozens of neighborhood councils, mobility advocates and some business groups.

Wexman backs the effort because he said the city is ineffective at improving mobility.

“People should feel safe walking or bike riding in the city,” he said. “With more bus lanes and other improvements, the public would utilize mass transit more frequently and we would reduce our greenhouse gas emissions”

With that possibility of a ballot measure looming, Council President Nury Martinez introduced a counter proposal, approved by the City Council earlier this year. She asked the city attorney to similarly create an ordinance that would make the mobility plan part of regular street maintenance.

Her effort pushes further in several ways: It seeks a working plan that prioritizes low-income and transit-dependent neighborhoods, adds a local hiring program and institutes more coordination between departments that tend to be siloed. Advocates and city officials have long decried the slowness of city projects that often must get sign off from multiple departments.

“We need solutions that work because traffic violence continues to rise, disproportionately impacting low-income communities of color,” Martinez said. “There is no doubt this is an equity issue. However, to resolve it we can’t rush a quick fix that could lead to even more disparity. We must have a systemic approach that looks at how we deliver infrastructure and who we deliver it to.”

Martinez’s approach has gained the support of a few mobility advocates who fear pushing forward the initiative without a plan could exacerbate inequity in the city.

“Streets For All has done an impressive job in pressing City Council to answer a question we’ve all had for a long time. Why are our streets and sidewalks so dangerous, so crummy, so inaccessible? But we need to understand the implications of the ballot measure,” said Jessica Meaney, executive director of Investing in Place.

Meaney points out that unlike other big cities, Los Angeles doesn’t have a transparent capital plan so one doesn’t always know what street projects will be funded when.

“There needs to be a slowdown. We need an implementation plan. The one thing the mobility plan does not have is project lists with budgets, with how much projects cost, what kind of scope it is and the timeline. ”

Martinez’s effort begins to answer those questions and, if adopted, could be rolled out by the time the ballot measure is slated to go to a vote.

For his part, Schneider backs the Martinez effort. But he also wants his measure to either be adopted by the council or go before voters. He warns that Martinez’s plans could all be upended if another regime comes in and reworks them. Overturning the ballot measure would require a majority of voters.

“We want a little bit more protection than just being at the whims of the City Council,” he said.