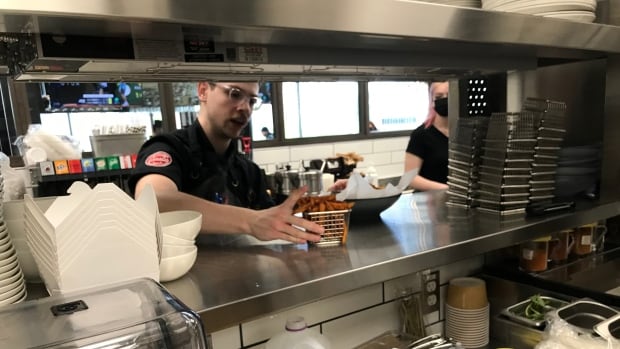 This story is part of Hire Calling, a CBC Vancouver series exploring the trends behind BC’s labor shortage and the creative solutions that some businesses are adopting.

Have feedback or a story idea? Email hirecalling@cbc.ca.

White Spot is a decades-old BC-based restaurant chain made popular by its focus on burgers and family dining.

But as the restaurant industry changes, the 93-year-old company is looking for new ways to attract not only customers, but employees willing to work for them during a labor shortage.

The changes are represented by The R + D Kitchen, a new restaurant concept from White Spot, which recently opened their first location in a mall in Burnaby, BC

For diners, an ever-changing list of specials joins familiar menu items in an effort to attract people with wider tastes.

And for restaurant staff, new incentives include better uniforms and training, and greater flexibility on their schedules.

White Spot President Warren Erhart said this is in recognition of the fact workers have outside lives, including families and hobbies.

The evolution represents a wider shift in the restaurant industry as a whole, aimed at offering employees more than just wages. The pandemic was hard on the hospitality industry as restaurants were forced to shutter, and many staff quit and now people in the industry say they have to change to survive.

On The Coast6:06How this Burnaby restaurant retains and recruits workers

On The Coast’s Caroline Chan visits a Burnaby White Spot location to find out how this industry giant is recruiting and retaining workers. It’s the first part of our new series “Hire Calling” that looks at trends in labour.

Dennis Innes, the dean of Vancouver Community College’s hospitality program, says employers are having to up the ante to recruit and retain staff.

“People in the industry want more of a work life balance and the employers are really having to accommodate that,” says Innes. “I think that is one of the biggest adjustments that employers are having to make.”

At one restaurant in West Vancouver, Isetta, they’re taking a creative approach to worker incentives including bus passes and sharing travel points earned on a company credit card.

When it comes to wages, Isetta partner and general manager Thomas Eleizegui says that even staff without experience start at $16 an hour, which is above the current $15.20 minimum wage in BC That also comes with an opportunity for a raise based on performance after three months . It’s part of Eleizegui’s philosophy of treating his employees well.

“The staff is key,” he says. “Even if you make a mistake, people come back because they’re a bit more patient with you because they get the service that they want.”

At the R+D Kitchen, White Spot executive chef James Kennedy shares what he’s doing to make it a friendlier workplace. Computers at each workstation means less yelling of orders and mix-ups. Kennedy admits that historically the restaurant industry tended to have chefs with hot tempers but he wo n’t allow that in his kitchens.

The Early Edition6:34A cafe in West Vancouver has come up with a new hiring strategy to attract workers

Kennedy sits on an industry training advisory task force, and says the shortage of workers has been felt at many restaurants during the pandemic. But as public health restrictions drop and restaurants start to bring back full service, the workers are coming back too.

The pandemic also offers new opportunities as take-out orders have become a major staple in their operations and they now have staff dedicated to packing up orders.

Have feedback on this series or a story idea for Hire Calling? Email hirecalling@cbc.ca.