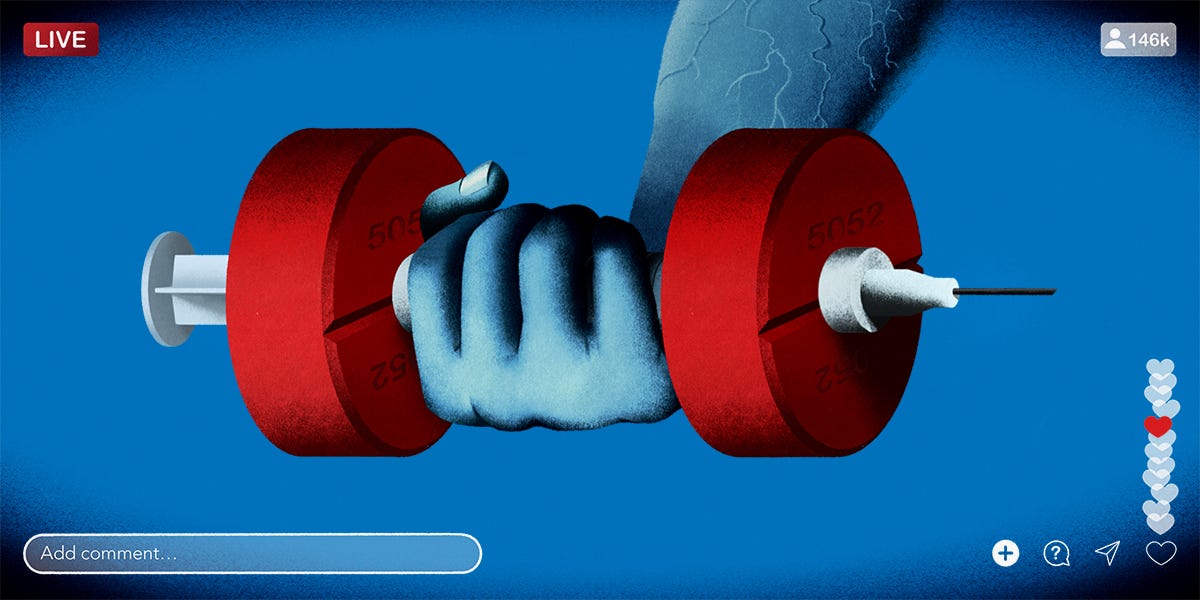 Speaking directly to the camera and showing flexed muscles, the bodybuilder David Rau cheerfully discusses “taking gear” — a slang term for steroids — with his 33,000 TikTok followers.

He tells his audience that without steroids, he wouldn’t be “anywhere near” where he is now, says girls will probably “like you more anyway” on performance-enhancing drugs, and shares his dosage and before-and-after clips of his “test cycle,” slang for a planned schedule of taking testosterone.

With 46,000 followers on TikTok, a fellow bodybuilding creator, Dawson Sanchez, is known to followers as “Daddy Tren,” a reference to trenbolone, a popular anabolic steroid that’s five times more potent than testosterone.

Sanchez advises users on how to start taking the drug, telling them to have a “fucking banging time,” warning them to control themselves over the “Staceys” (attractive, gym-going women), and arguing that tren is “not nearly as bad as people say.”

Rau and Sanchez, who did not respond to requests for comment, are part of a growing community of “unnatty” (slang for unnatural) bodybuilders, who use steroids or performance-enhancing drugs and post about it online. Many top fitness influencers go to great lengths to hide their use of steroids, but this increasingly high-profile group has built a following on open discussion about being “enhanced.”

While influencers such as Rau and Sanchez acknowledge the health risks of PEDs, it’s treated as a secondary topic. Viewers who comment with their concerns are often mocked or told they’re not educated enough on the realities of PEDs. Other influencers say they know there are dangers, telling followers to “do as I say, not as I do,” despite regularly showing their progress on the drugs.

By transparently showing their own steroid cycles, how they cope with common side effects, and other tips and tricks, “unnatty” influencers are building huge followings. On TikTok, videos under the hashtag #steroid have racked up 296.1 million views, while #steroidtransformation, where people showcase before-and-after videos of their steroid use, has 23.6 million views. And #notnatty, where influencers showcase their gains, has 75.8 million views.

TikTok’s terms of service bar the promotion of controlled substances, including steroids. But influencers have found clever ways to get around the platform’s moderation, from emojis with double meanings to jokes and memes.

Advocates of the trend say it’s a breath of fresh air in the world of bodybuilding content, where some influencers misleadingly attribute their physiques solely to diet and exercise. By admitting that the “ripped” look of an A-list star or top bodybuilder is often unattainable without steroids, #notnatty influencers can help combat bigorexia and body dysmorphia, they say.

But influencers aren’t always forthcoming about the long-term risks of steroid use, which can include heart attacks and infertility. Fitness influencers, personal trainers, and doctors interviewed by Insider said this has led to a wide range of people, many of them underage, trying PEDs without understanding the harm they could be doing to their bodies.

“There’s no what could go wrong, or how this stuff even works,” said Carter Kissick, a personal trainer and bodybuilder who has amassed 19,000 Instagram followers with honest discussions of his own steroid use. “It’s just, ‘I took this, and now look how big and strong I am.'”

How steroid use is being discussed online

A spokesperson for TikTok told Insider that content that depicts, promotes, or offers the purchase, sale, trade, or solicitation of drugs and other controlled substances, including steroids, violates the company’s community guidelines and will be removed from the platform.

That’s why many TikTokers who talk about their steroid and PED transformations do so in ways that don’t outright state that they’re using — unless you know what to look out for. A bicycle emoji is often used as a reference to a steroid cycle, while a syringe emoji is an identifier in users’ bios to show that they’re not training naturally.

Lighthearted content about using PEDs is another way for users to hide in plain sight. They post videos about trying to fool their parents into thinking they’re all-natural. Instagram meme pages find humor in the side effects of PEDs, which include anger issues and hot flashes.

‘Some guys just do it for the clout’

Nate Blackwell, a competitive bodybuilder and micro influencer with about 4,800 TikTok followers, has documented his steroid journey on TikTok, Instagram, and YouTube. His TikTok feed from him is a mixture of bodybuilding transformation videos and jokes and memes about using steroids.

In one video, Blackwell holds up a syringe and alludes to it being “the only way to get huge.” In another, he addresses the people in his comments who talk about “the side effects of st3roids” using a popular sound as a response: “I don’t give a fuck about none of that shit.”

Blackwell told Insider that he prefers to be honest about his steroid use because the fitness industry “takes advantage” of people who claim to be natural, using them to “push their products.” While he aims to talk about the risks as well as the benefits, he doesn’t shy away from helping followers with their PED cycles, saying that he’d rather they learn how to do it properly.

“I never give out sources for buying steroids to people, but I help them with doses and frequency of injections,” said Blackwell, who takes testosterone and the steroids Deca-Durabolin and Dianabol. “I can also document my own personal journey for people to go back and see what caused me issues, and hopefully help them avoid those things.”

That level of responsibility isn’t universal, he said, adding, “Some guys just do it for the clout.”

Robert, a 30-year-old in the UK, has 16,000 followers on TikTok, where he regularly posts about his training and muscle-building progress, including his steroid use. (I have requested to have his last name omitted for work-related privacy reasons.)

Robert mainly shares snippets of his workout achievements, as well as lighthearted sketches and fitness challenges. While he doesn’t post content advocating steroid use, he does share the progress he’s made as a result, such as performing 25 bench-press reps of 220 pounds.

“You get to a certain crossroads when working out,” said Robert, who’s taken testosterone, trenbolone, and growth hormone. “You can stay natural and realize you’re never going to look like you do in your dreams, or you can push it to the next level and realize that in order to look how you dream of looking, you’re going to have to take steroids.”

Robert says outright in his videos that he doesn’t condone steroid use, and he’s told followers in his comments and direct messages not to copy him, he said. But he doesn’t shy away from showing the results he’s gotten.

Influencers downplay longer-term risks, such as heart attacks and infertility

In interviews with influencers who are open PED users, an overarching belief seems to be that they are doing it the right way, whether that’s getting regular blood tests or taking scheduled breaks from using the drugs. If users just did the research before trying steroids, they’d be fine, they said.

Tobias Holt, a micro influencer with 7,000 Instagram followers, compares steroid use to using anything in excess. You can die from drinking too much water, he said, adding, “It’s exactly the same thing with steroids.”

But any anabolic steroid use can have dangerous long-term effects, said Dr. Harrison Pope, a professor at Harvard Medical School and a leading expert on steroid use. Users can permanently damage their heart muscles and increase levels of “bad” cholesterol, increasing the risk of a heart attack, or cause the tests to stop manufacturing testosterone, leading to infertility.

Despite that, most influencers who are honest about the side effects of PEDs focus on those that are most pressing for young men — a lack of sex drive, acne, and lethargy — while ignoring the more serious long-term threats.

Some influencers “don’t really talk about any negatives,” said the bodybuilder Ryan Schmidle, who’s transparent about his steroid use with his 543,000 TikTok followers. “They never say how much they’re actually taking, when they’re coming off, what they have to do to prevent any health complications. They pretty much only talk about the positives.”

Most steroid influencers are serious bodybuilders — but their followers aren’t

Competitive bodybuilders have long accustomed themselves to the risks and benefits of using steroids to get ahead in their field. Now, they have followers across the globe who’ll never see competition but are using it anyway, Pope said.

“Probably 80% of steroid users have not used steroids for any athletic purpose at all and have used them only because they wanted to get bigger,” Pope said. “A much larger population of ordinary weightlifters in local gyms are taking these drugs purely for the purposes of personal appearance.”

In a 1997 paper, Pope coined the term “bigorexia” to describe men who would go to the gym and get larger and more muscular but continue to feel insecure, believing they were too small.

“This can become quite severe to the point where some of these men will refuse to ever be seen in any public situation with their shirt off, or they would never accept an invitation to go swimming or go to the beach or something where their body would be visible,” he said. “Because they become so fixed that their body is not muscular enough.”

A 2013 review of studies from Pope and his colleagues suggested that 32% of anabolic steroid users become dependent.

Taking any kind of PED can be psychologically addictive, said Kissick, the bodybuilder and personal trainer.

Men can get their identity wrapped up in being “a bigger or stronger guy,” he said, which makes it hard to come off the drugs. “Who’s going to feel like Superman and then be OK feeling like a person again?”

Kissick said he’d likely be on hormone replacement for the rest of his life. He takes testosterone year-round at a hormone-replacement dose, then does six- to 12-week steroid cycles when competitions are coming up.

He said he knows he’s taking a gamble with his health to build his competitive bodybuilding career, but that he hopes men who want to look bigger think about whether the benefits outweigh the effects down the line, regardless of what their TikTok and Instagram feeds say.

“It’s quite literally like Icarus,” he said. “You fly too close to the sun.”