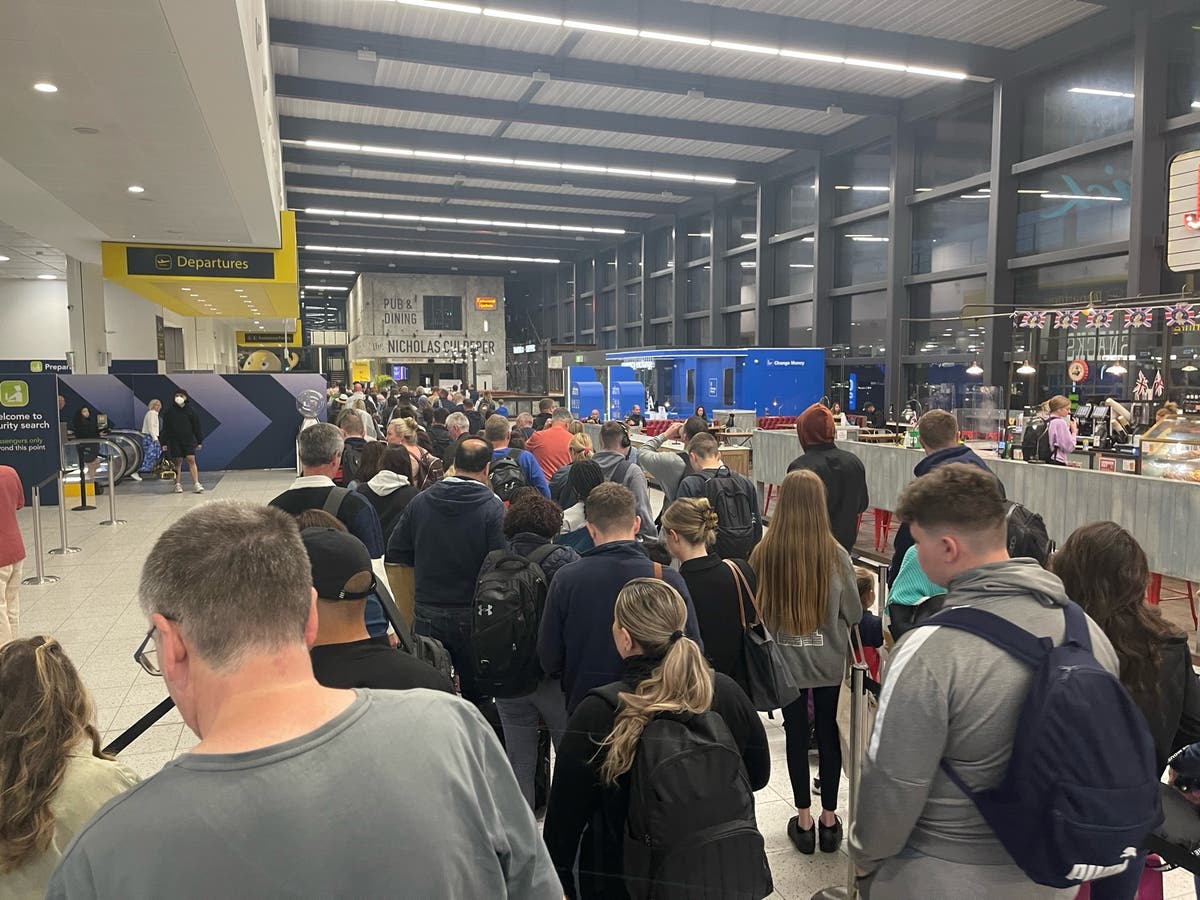 British Airways has announced the cancellation of at least 124 short-haul flights at Heathrow on Wednesday as airlines struggle to cope with soaring half-term holiday demand.

The airline says passengers were given advance notice. Meanwhile EasyJet has canceled at least 31 flights at Gatwick, including to destinations such as Bologna, Italy; Barcelona, ​​Spain; Prague, Czech Republic; Kraków, Poland; and Edinburgh.

It comes after as a Cabinet minister slammed aviation bosses for the chaos at airports in Britain stressing they were warned months ago they needed to recruit more staff.

Deputy Prime Minister Dominic Raab accused airline chiefs of a “lack of preparation” for the upsurge in people who have booked foreign holidays.

Tens of thousands of families have had flights canceled or delayed in recent days and there are fears the problems will get worse in the summer months.

Mr Raab told Sky News: “There has clearly been a lack of preparation for that arising back of demand from holidaymakers.

“Grant Shapps, the Transport Secretary, has been talking to the industry for months now, saying that this would come and they need to make sure you have got your recruitment in place.

“I don’t think the airline operators have done the recruitment that they should have done and taken the advice that the Transport Secretary gave them.”

The aviation industry must “do their bit” to resolve problems which have led to chaotic scenes at airports across the country, the Transport Secretary has told travel bosses.

Grant Shapps said while he understands there have been “resourcing strains on the aviation sector”, that is no excuse for poor planning and overbooking flights.

He described scenes at airports with lengthy queues and flight cancellations as “heart-breaking” as some holidaymakers had hoped to take their first trips abroad after the pandemic.

More than 150 UK flights were canceled on Wednesday – the eve of the Platinum Jubilee bank holiday weekend.

On Wednesday afternoon, Mr Shapps and aviation minister Robert Courts led what the Department for Transport described as a “productive meeting” with senior leaders from the aviation industry including airports, airlines and ground handling companies.

Following the meeting, Mr Shapps warned that there cannot be a repeat of such disruption over the summer.

He said: “We’re grateful to those airlines and operators who have continued to deliver good services despite the current pressures and we recognize that not all operators have been affected in the same way.

“I also understand the resourcing strains on the aviation sector but it does not excuse poor planning and overbooking flights that they cannot service. The companies who have seen the most disruption need to learn from those who ran services smoothly.

“We will continue to monitor the situation closely to make sure consumers don’t lose out from any further disruption.”

He said he and Mr Courts “have made the changes needed to allow the sector to prepare for summer, but now we need industry to do their bit”.

He added: “We have been crystal clear – run services properly and according to schedule or provide swift, appropriate compensation. We do not want to see a repeat of this over the summer – the first post-Covid summer season – and will be meeting again in the coming weeks to understand the progress that is being made.”

Transport Secretary Grant Shapps and Minister Robert Courts were due to meet aviation leaders on this afternoon to discuss the problems as 150 UK flights were canceled today alone.

EasyJet canceled at least 31 flights at Gatwick, including to destinations such as Bologna, Italy; Barcelona, ​​Spain; Prague, Czech Republic; Kraków, Poland; and Edinburgh.

British Airways axed 124 short-haul flights at Heathrow, but the airline says passengers were given advance notice.

While many passengers traveling from Gatwick have reported significant delays, others seem to have had smoother experiences.

One said on Twitter: “Amongst all the negative I wanted to say thank you! Small wait at baggage drop on Monday, nothing out of the ordinary and security was smooth, flight landed as scheduled and I’m tweeting from my sun lounger”.

Another said: “I got to Gatwick 3 hours early. Queue for vueling check-in was 35mins. Queue for security was less than 5mins. A lot easier than I expected.”

A third added: “Fair play – at Gatwick_Airport and checked in with the friendly TUIUK staff with no queues and no problems”.

An estimated 19 million drivers will hit the road at some point over the long Platinum Jubilee weekend, a new survey suggests.

Some 53% of respondents to an AA poll of 13,062 motorists said they will drive at some point between Thursday and Sunday.

They will face record fuel prices, with the average price of petrol reaching 174p per liter on Tuesday, while diesel climbed to 183p per liter.

AA president Edmund King said: “The Platinum Jubilee will not be just an extended bank holiday.

“The AA survey points to 57% of people in the UK celebrating the event in some way other than just watching it on the TV or choosing not to celebrate at all.

“In many ways, a family or local community-oriented celebration is perfect for marking the event.

“Away from the local street parties, some roads will be busy.

“The AA warns drivers to be prepared for some delays around supermarkets and other shopping centres.”

Union leaders are calling for urgent talks with London Mayor Sadiq Khan in a bid to avert a 24-hour Tube strike.

Members of the Rail, Maritime and Transport union are set to walk out on Monday, threatening travel chaos immediately after the Jubilee weekend.

The union is protesting over job cuts and a “looming threat” to pensions.

There’s no point in our union continuing to sit opposite management representatives who have neither the inclination nor the authority to negotiate a settlement, when the power lies with the Mayor

RMT general secretary Mick Lynch said: “We are demanding a direct face to face meeting with Major Sadiq Khan to sort this mess out.

“There’s no point in our union continuing to sit opposite management representatives who have neither the inclination nor the authority to negotiate a settlement, when the power lies with the Mayor.

“The major of London has tax-raising powers. Just four banks made a profit of £34bn last year and are set to pay out over £4bn in bonuses to London traders. A windfall tax on those profits would more than adequately fund London’s transport network.

“Mayor Khan must choose either the take on the Tory government and demand a just funding deal for Londoners or attack loyal Tube workers who keep the capital moving day in day out.”

ourreporter Esra Arahu is on the ground at Gatwick speaking to passengers about their experiences.

A group of four has told the Standard they were left stranded overnight at Gatwick airport, after being forced to wait four to five hours at baggage reclaim for their luggage.

The group, including a two-year-old child and a heavily pregnant woman, landed back in London late on Wednesday from Antalya in Turkey.

They only managed to leave the airport by noon on Thursday and said the wait had been really hard on them.

“The wait was torture, especially with a baby and a pregnancy. “The service was terrible,” one of the group said.

Meanwhile, another passenger, Joanna Sadec, 58, and her family arrived at the airport with hours to go before their 11:05 am flight.

They waited to find they had received a notification telling them that their flight was cancelled.

Ms Sadec said: “Nobody was helpful. We were given a number to call but there was nobody there.

“They then sent us to a gate to collect our luggage but there was nobody there.

“The service was really poor and only one person tried to help us.”

She said that she is now being forced to take another flight from Luton on Friday.

Unite: Travel chaos is because thousands of jobs have been cut

Unite general secretary Sharon Graham said: “The UK’s airports are in crisis because thousands of jobs have been slashed and working conditions attacked.

“Our money was handed over to firms without any strings attached. Literally hundreds of millions went to the aviation sector during the pandemic, and instead of bringing stability those firms have brought us chaos.

“They did not protect jobs, many just used public money to prop up their share price or to pay for ‘fire and rehire’ to hammer pay and conditions. That is why we are where we are.

“It’s time for public money to have a hard-wire link to jobs. No more handouts without responsibilities. Taxpayers do not pay firms to sack their workers and cut their pay and conditions.”

Calls for Army to save Jubilee weekend from travel chaos

The Liberal Democrats have called for the Army to be deployed to stop the “chaotic scenes at airports up and down the country”.

“Families’ half-term getaways have been thrown into disarray and now they face the prospect of a long weekend spent sleeping in airports and sitting in traffic jams,” the party’s transport spokesperson Sarah Olney said.

“We need drastic action now to tackle this travel carnage and break the logjam.

“That’s why drafting Britain’s best and brightest logistics minds from the Army to get things moving again is a no-brainer.

“Conservative ministers need to get a grip on this chaos at the 11th hour to save the jubilee weekend. Empowering the Army to run point from a command center would do just that.”

Airlines UK, the industry body representing UK-registered carriers, said the aviation industry did not know when restrictions would be completely removed or how much flying would be possible this summer.

It added that “the vast majority of the many tens of thousands of UK-departing flights a week” are operating as scheduled.

All remaining coronavirus rules for people entering the UK were lifted on March 18.