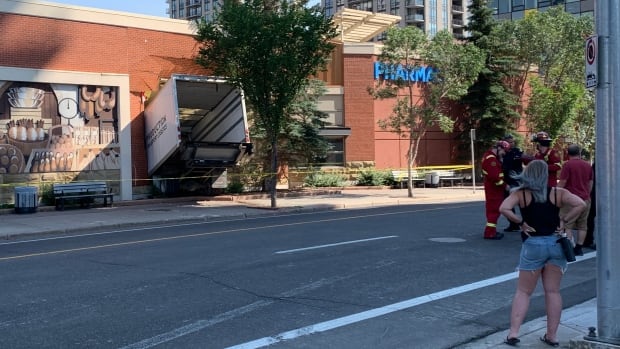 Emergency crews are investigating after a transport truck smashed through the brick wall of the Midtown Co-op grocery store in downtown Calgary.

A spokesperson for the Calgary Police Service (CPS), said the driver of the truck fled the scene.

Carol Henke, a public information officer for the Calgary Fire Department, said crews received calls around 2:30 pm that a cube truck had crashed into the west side of the Co-op building in the 1100 block of 11th Avenue SW

Three people were taken to the hospital with minor injuries, she said, and customers and staff were removed from the building.

In an email statement to CBC News, a spokesperson for Calgary Co-op said two staff members were assessed at the scene and taken to the hospital as a precaution.

“Our first priority is ensuring the safety and care of our impacted team members and customers at this location. No customers were injured in the incident.”

The store is closed and is expected to remain closed on Friday as well.

Roads in the area will be closed on Thursday during the afternoon rush hour, said police.

Henke said a technical rescue team came to the scene.

The fire department later added in a statement that a safety codes officer from the city’s safety response unit as well as a structural engineer from the city also came to the scene to assess the level of damage and provide guidance on the safest removal of the vehicle.

“[The truck] created actually substantial damage to the building and impacted some of the structural beams as well,” said Henke.

“We want to get the truck out without doing any more damage and seeing what needs to be done to mitigate the situation until the business can get permanent repairs done.”

Henke added that power was shut off in the affected parts of the building.

“We wanted to not impact the products that are on the shelves that need refrigeration and need to remain frozen.”

CPS said the cause of the crash is still unknown and officers continue to investigate.