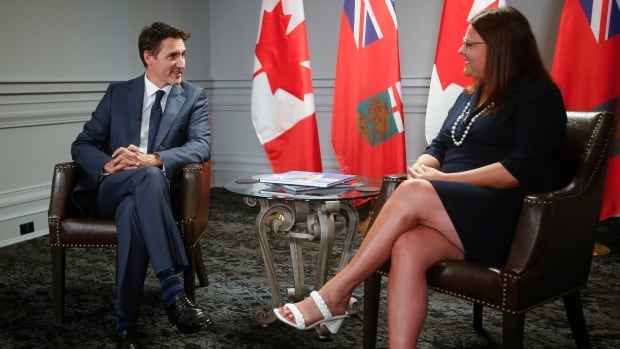 Prime Minister Justin Trudeau accused some politicians Thursday of being dishonest about the effects of the federal government’s carbon tax.

The comment, partially aimed at Manitoba Premier Heather Stefanson, was the latest episode in a long-running dispute over carbon pricing between the province and Ottawa.

“What the premier and others across the country don’t seem to be honest about with Canadians is in the places like Manitoba, where the federal price on pollution applies, average families get more money back from the price on pollution than the extra price on pollution costs them,” Trudeau said in Winnipeg, shortly before a half-hour meeting with Stefanson.

“We found a way of fighting climate change while supporting families who need that support, and that’s something that we are going to continue to do.”

Trudeau’s comments were in response to Stefanson’s demands for a temporary suspension of the carbon tax to help people deal with inflation. She sent a joint letter earlier this year with Alberta Premier Jason Kenney and Saskatchewan Premier Scott Moe that urged Trudeau to take action.

WATCH: Stefanson says Ottawa could do more to help Manitobans struggling with inflation

‘Now is the time to help’: Manitoba Premier Heather Stefanson addresses rising inflation in her province.

Following the meeting, Stefanson said she and Trudeau discussed the issue but remained at odds. She said suspending the tax would be more helpful than collecting it and then providing rebates.

“Manitobans need that money now. So rather than taking the money away from them and going through rebates and all this, just leave the money with them,” she said.

Trudeau also battled with Stefanson’s predecessor, Brian Pallister, over carbon pricing. The province’s Progressive Conservative government had planned to implement its own carbon tax in 2017, but withdrew it after Ottawa said the provincial tax was not high enough.

The federal Liberal government then imposed its own “backstop” system. It adds to the price of gasoline, natural gas and other goods, then refunds money through rebates checks.

Manitoba took the issue to court and argued that the federal government had no right to impose the backstop. The Federal Court sided with Ottawa last year.

Earlier Thursday, the four Atlantic premiers sent a letter to the federal government requesting a short-term extension to the deadline for submitting plans for their own carbon pricing systems. The letter said the added costs imposed by the tax would amplify inflationary pressures in Atlantic Canada.

Ottawa’s deadline for provinces to submit their plans is Friday.

Stefanson’s Tories have been working more harmoniously with the federal government on several fronts, including a recent agreement to upgrade the rail line to Churchill in the province’s north. The two governments are also working together on increasing immigration levels, Stefanson said.

But there are other points of contention. Stefanson has criticized the federal government’s plan to cut fertilizer emissions by 30 per cent by 2030. That issue was discussed during the meeting, Stefanson said, and she and the prime minister continue to disagree.

During his daylong visit to Winnipeg, Trudeau also met with nursing students at Universite de Saint-Boniface in a mock hospital room with fully equipped beds and mannequins for patients.

Trudeau then visited with parents and children at a child-care center.