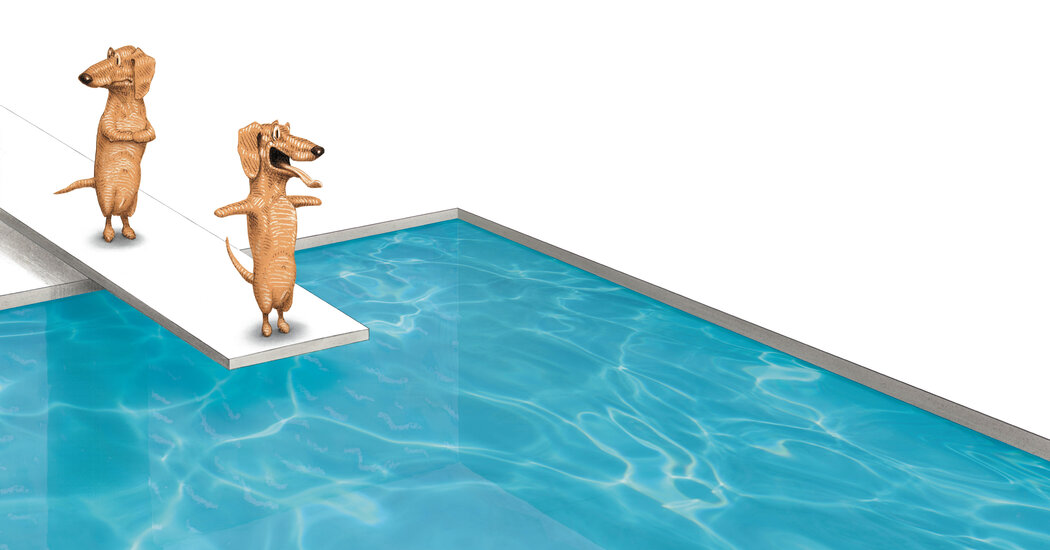 The creator of the “Olivia” books brilliantly displays his theatrical experience as a stage designer in this delightful tour de force about twin dachshunds who escape outside together when their humans leave them alone. Drawn in what looks like caramel pastel crayon, Augie and Perry — a veritable vaudeville act of opposite personalities — gaze through the glass of a charcoal door frame at a yard that looks like a hyperreal color photograph, a playground diorama with lime-green grass so perfect it’s surely artificial. Before we know it, our animated canines have leapt into an expanded set: paradise, with a pool. This impeccably choreographed ballet is sure to produce cries of “Encore! Encore!”

After swimming for his life, an elephant whose boat was sunk by a “boisterous” wave reaches a “tiny island” — a rock barely big enough to stand on. One by one, small animals in small vessels arrive to “rescue” him. Each time he “puts his foot in it,” sinking the vessel as he steps aboard, and each time he does his best to “salvage the situation,” cheerfully adding a new companion to his pocket-size space. In yet another triumphant experiment for the award-winning Timmers, his medium from him — here different kinds of sponges, razor blades and paint rollers to create different kinds of textures — is the quintessential embodiment of his message from him: “the magic of happy accidents.”

In his first solo outing, Denise matches stellar deadpan wordplay with an Old Masters-style chiaroscuro technique that’s pure derring-do — a perfect fit for a book about a small owl with big ambitions. Though lifting even the tiniest shield causes Owl to fall backward, and he has “a habit of nodding off during the day,” his chivalry of him will charm even the most wrathful dragons among us.

NORTON AND THE BEAR
Written and illustrated by Gabriel Evans

The conceit that enables the premise of this book — poignant comic tension between an “exceptionally unique” dog and a copycat bear — to succeed so spectacularly is its setting, a world in which fully dressed animals walking on two feet mingle seamlessly with humans. A hen toting a briefcase watches with neighborhood children as a beret-wearing cheetah juggles on the street; a fox chats with a girl at a cafe; a tortoise in a business suit carries a bag lunch on his way to work. Norton and the bear don’t just seem human; they are human. And clothes don’t make the animal.

One of several collaborations between Martin (“Chicka Chicka Boom Boom,” “Brown Bear, Brown Bear, What Do You See?”) and his good friend and fellow literacy expert Sampson that were left unpublished at Martin’s death in 2004, “Armadillo Antics ” pays tribute to the night creatures that roamed the woods outside their houses in Commerce, Texas. It’s this nocturnal aspect that the talented Argentine collagist Beauvois captures so beautifully. While highly influenced by the painted cut-paper style of Eric Carle, Beauvois’s brush strokes are more rough-hewn, her textures more raised, her backgrounds darker. And sometimes—yes, it’s true—she intentionally strays outside the lines.

Jennifer Krauss is the children’s books editor of the Book Review.