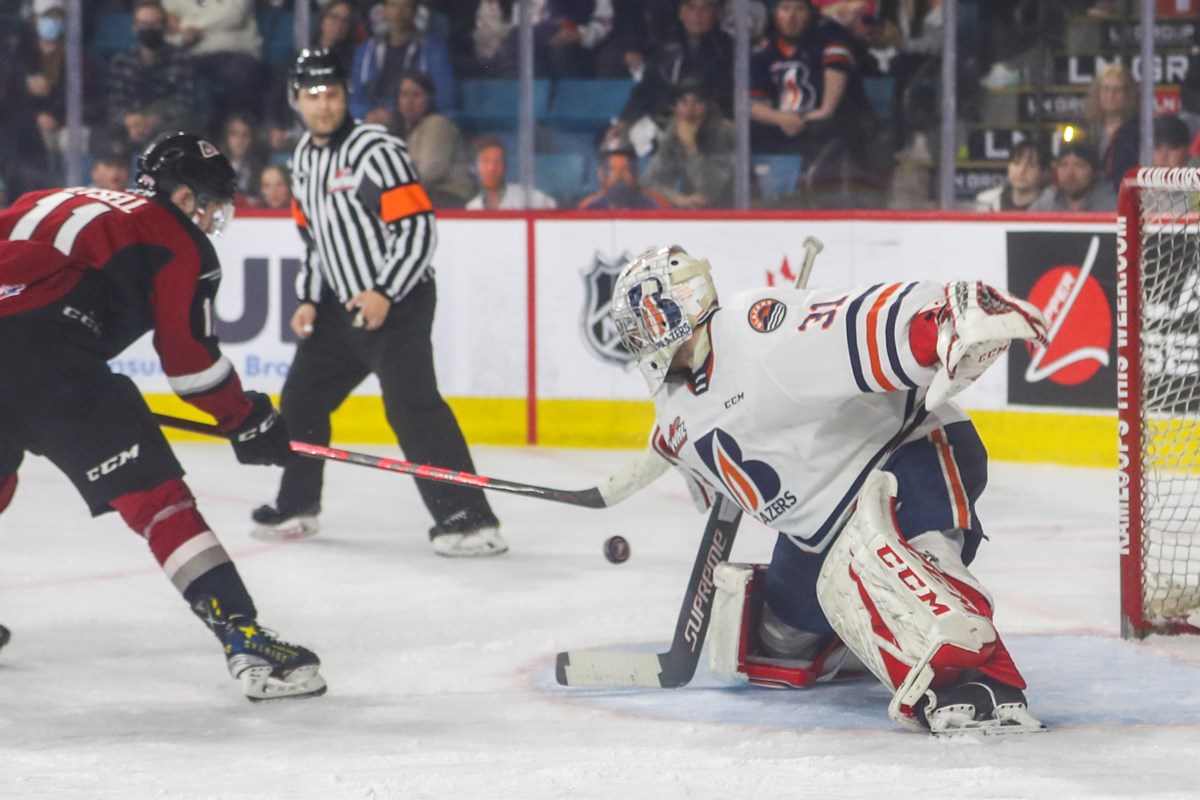 “I don’t know if you call it karma, but it’s funny how things work that way,” said Dyck, whose Giants, with another character win, forced Game 6 in the best-of-seven Western Conference semifinal series, a 4 pm start on Sunday at the LEC.

Vancouver Giants’ head coach Michael Dyck chuckled at the uncanny finish to his club’s 5-2 victory over the Kamloops Blazers on Friday at Sandman Centre.

“I don’t know if you call it karma, but it’s funny how things work that way,” said Dyck, whose Giants, with another character win, forced Game 6 in the best-of-seven Western Conference semifinal series, a 4 pm start on Sunday at the LEC.

The Giants were assessed a too-many-men bench minor late in the third period in Game 4 on Thursday at the LEC, a penalty that allowed Kamloops to add an empty-net insurance marker on the power play in a 4-2 victory.

Dyck danced around a fine with his post-game comments in a media scrum, but said enough, including that it was the Kamloops bench that called the too-many-men penalty, to convey his displeasure with officiating.

On Friday, the Blazers were assessed a too-many-men bench minor late in the third period, a penalty that allowed the Giants to take a 4-2 lead with an empty-net insurance marker on the power play.

Vancouver added one more into an empty net before Kamloops fans echoed the same refrain — “Ref, you suck! Ref, you suck!” —heard one night prior on the Lower Mainland.

“I guess the game just has a way of doing that,” Dyck said with a smile that bordered on a smirk.

There was another similarity between the games — officiating did not decide them.

“They came with a lot of energy in the third,” Blazers’ forward Matthew Seminoff said. “A couple slip-ups and that’s all it really took. The playoffs are so tight. You can’t really take any shifts or periods off. We’ll just be ready to respond on Sunday.”

That is lofty standing that demands respect on a 2-on-1, making him both a Grade A passing option and perfect decoy for Luke Toporowski, the Bettendorf, Iowa, product who was tickled to let his linemate linger, a red herring.

Toporowski’s toe-drag wire job put Kamloops up 1-0 at 4:27 of the first period.

He celebrated his seventh goal of the post-season as he often does — in elaborate style, irking opposition and jazzing fans with a sliding haymaker fist pump.

The underdog and injury plagued Giants, whose persistence helped them score an astounding upset of the Everett Silvertips in Round 1, snared an equalizer less than five minutes later.

Adam Hall tied Stankoven atop the WHL playoff goal scoring race with a wraparound effort, his ninth goal of the post-season coming at 9:09 to quiet the crowd of 4,337.

“There is a lot of belief in our room,” said Giants’ forward Zack Ostapchuk, who had two goals and four points on Friday. “We’ve been kind of battling since February to get where we are right now. We’ve got to have that same mindset going into Sunday and we’ll give ourselves a good chance.”

An odd bounce led to the only goal of the second period.

Vancouver goaltender Jesper Vikman did not see the puck ricochet off the boards behind him and settle directly under his nose, where Seminoff sniffed it out and shoveled in his third of the playoffs.

“It’s disappointing, a pretty crappy loss, but at the end of the day we’ve got to use that as motivation and put it in the past and learn from it by tomorrow,” Seminoff said.

With a 2-1 lead after two periods, the Blazers were 20 minutes away from a trip to the conference final.

“We didn’t really talk a whole bunch about the Kamloops Blazers,” Dyck said of his message in the second intermission. “We talked more about the Vancouver Giants and the way we had to play. Too many passengers in the second period.”

The Giants stunned the Blazers to start the third period, with Ty Thorpe tallying at 1:33 and Ostapchuk burying the game-winner at 2:32.

“Going into the third, we wanted to have no regrets and play our hearts out,” said Ostapchuk, who has a league-leading 23 points in 11 playoff games. “We knew what was at stake. We knew our season was on the line.”

“Just to try to get us back on track, try to get the guys focusing on what they need to do next,” Clouston said. “I thought there were stretches that we pressed. We had some really good chances to tie it up. I thought it was a decent response.”

Hall added the first empty-net marker at 18:22, his league-leading 10th of the playoffs, and Ostapchuk potted the second at 18:38.

Vikman stopped 35 shots to pick up the victory between the pipes, while Garand made 21 saves in a losing effort.

Neither team registered a power play goal. Kamloops was 0-for-3. Vancouver was 0-for-2.

“Backs against the wall and down by one, we knew we had to make a push,” Dyck said. “Now we’re focused on going on back home. We’re not worried about winning a series. Going into Game 6, it’s going to be all about our start.”