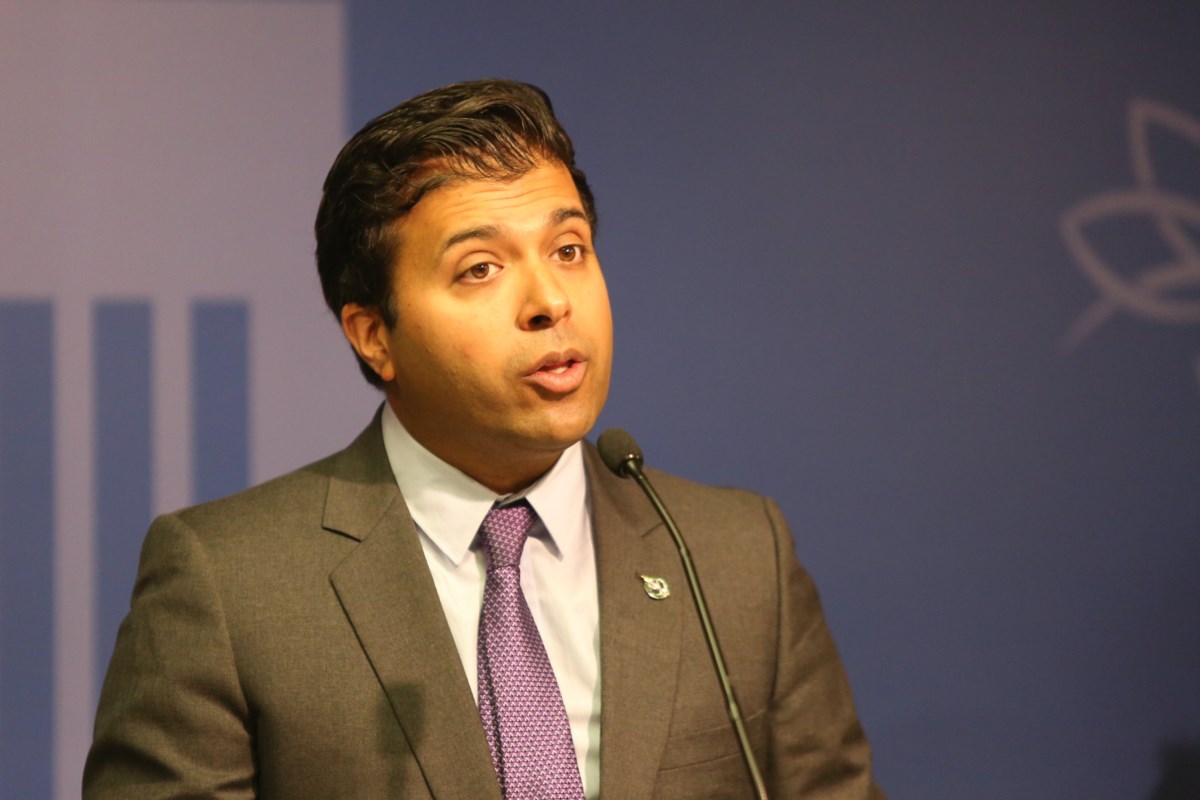 Taleeb Noormohamed: ‘It was very different because it actually contained a desire to do harm.’

Vancouver-Granville Liberal MP Taleeb Noormohamed says he received a serious threat from a man in July that caused him to involve the Vancouver Police Department, RCMP and Canada Border Services Agency in an investigation.

Noormohamed took to Twitter July 8 to reveal some of the details of the threat but shared more last week in an interview with Vancouver Is Awesomeincluding the fact that no charges were laid against the person in question.

The first-term MP said the threat came July 7 via email and included a video.

“When you are a Muslim, or a certain group, or minority, there are lots of messages like this [that] we get pretty regularly,” he said. “But this one, as I said in the tweet, was specific…it was very different because it actually contained a desire to do harm.”

Noormohamed said the person lives close to his constituency office and was known to police. I have declined to discuss the contents of the video.

Const. Tania Visintin, a Vancouver police media relations officer, said Wednesday (Aug. 3) via email that officers apprehended the man under the Mental Health Act and transported him to hospital for assessment.

Why Canada Border Services Agency was involved is not clear. The agency has yet to respond to Vancouver Is Awesome’s request for more information about the case and whether it involved someone illegally in the country.

‘Part of the life of being elected’

As a politician of colour, who is also Muslim, Noormohamed said it is not uncommon to receive angry emails daily in which an author uses a racial slur. His colleague of his, Vancouver-South Liberal MP Harjit Sajjan, has also been a target of such racism, he said.

“The idea that when we can normalize racism, or normalize this type of behavior in a way that says we are going to just go at people because they are different is something that is now, unfortunately, part of the life of being elected,” he said, noting female colleagues have also had inappropriate comments directed at them.

“There’s a heightened sense of concern about the tone and nature of the communication that we now receive from folks.”

Noormohamed serves on the Standing Committee on Public Safety and National Security — a group that recently targeted the rise of ideologically motivated extremism in Canada.

In a report released in June, the standing committee traced the rise of a diffused Canadian far-right movement, one that allows adherents to cherry pick what they hate, including Muslims, immigrants and women.

Jessica Davis of Insight Threat Intelligence told the committee that laws are not applied evenly across the ideological spectrum, leading to a “certain sense of impunity.”

A 2021 Canadian Security and Intelligence Service (CSIS) report found the COVID-19 pandemic has “fuelled an increase in extreme anti-authority and anti-government rhetoric often rooted in the weaponization of conspiracy theories.”

In May, NDP Leader Jagmeet Singh faced protesters shouting expletives at him and calling him a “traitor.”

Singh has said the experience in Peterborough, Ont., was one of the worst incidents of aggressive behavior he’s experienced in his political career.

Last month, an increase in threats against federal parliamentarians prompted the Parliamentary Protective Service — which safeguards security on Parliament Hill — to hand out personal panic buttons or “mobile duress alarms.”

MPs can carry them around to immediately alert the Parliamentary Protective Service or local police for a rapid response.

The device can be used across Canada, including in MPs’ home constituencies, according to a June presentation made by Sergeant-at-Arms Patrick McDonnell to Liberal MPs.

In an interview with the Canadian PressPublic Safety Minister Marco Mendicino revealed he has been the subject of death threats on social media in recent weeks after presenting a bill curbing gun ownership.

Mendicino said he, police and the Parliamentary Protective Service are reassessing the security of MPs after a series of threats and intimidating incidents.

Alex Cohen, Mendicino’s director of communications, said in an email there has been an alarming rise in hateful rhetoric in recent years, which has resulted in an unacceptable level of threats and intimidation against elected officials.

“It affects people across the political spectrum – it is not a partisan issue,” Cohen said.

“Furthermore, this heinous rhetoric and behavior has particularly targeted women, LGBTQ individuals and Indigenous peoples. Minister Mendicino joins a chorus of voices from across the country in strongly condemning it, and taking action. This includes increased security for Parliamentarians, including mobile duress alarms provided by the House of Commons.”

Most notably, Cohen continued, the minister’s mandate letter includes specific instructions to “work with the Minister of Intergovernmental Affairs, Infrastructure and Communities to bolster the security of ministers and Parliamentarians.”

“This work is well underway, in collaborating with the Sergeant at Arms of the House of Commons, colleagues from other parties and law enforcement from across the country,” Cohen said.

In July 2020, Vancouver city councilors Melissa De Genova and Sarah Kirby-Yung announced at a council meeting that they had been harassed via emails, social media and phone calls. Both are married to police officers and the topic before council at the time was police “street checks.”

“These have included calls for me to commit suicide and threats of violence to me and my family,” De Genova wrote in an email to Glacier Middle at the time. “I am targeted because of my husband’s employment as a police officer. I suspect the ways I have been targeted are because I am a woman.”

The level of hate against women politicians is documented in a report released in April 2019 by the House of Commons’ standing committee on the status of women. The report’s title is “Elect her: A roadmap for improving representation of women in Canadian politics.”

The report noted that gender-based violence or harassment against female elected officials can take many forms including sexist comments or insults, sexual harassment, sexual assault and death threats.

A survey referenced in the report revealed that more than 80 per cent of respondents indicated having experienced some form of psychological violence during their parliamentary terms, and 20 per cent reported being victims of physical violence.

Hate-motivated crimes up 27 per cent

Statistics Canada released new data Tuesday that showed the number of police-reported hate-motivated crimes in Canada increased by 27 per cent, up from 2,646 incidents in 2020 to 3,360 in 2021.

“All provinces and territories reported increases in the number of hate crimes in 2021, except for Yukon, where it remained the same.”

In Vancouver, it has been well-reported that hate crimes against Asians increased substantially since the pandemic was declared in March 2020, with police reporting a 717 per cent increase between 2019 and 2020.

At the same time, police have been clear they don’t believe all victims are reporting the incidents, as was confirmed by Fred Kwok, chairperson of the Chinese Cultural Center and president of the Chinese Benevolent Association.

Kwok suggested at Vancouver Police Board-sponsored forum in May 2021 that reported hate crimes over the past year only accounted for one-third of all cases, saying “I know many friends of mine who never reported the incidents.”

A survey conducted in April and May of 2021 by the BC Center for Disease Control found 20 per cent of South Asian respondents reported experiencing racism during the pandemic, with 43 per cent experiencing discrimination in the workplace.

The Statistics Canada report confirmed the pandemic’s negative effect on racialized groups, noting they were more than twice as likely to report experiencing discrimination since the beginning of the pandemic, compared with the rest of the population.

Jewish people in Vancouver have been the primary targets of racists for years, with the city’s Jewish community center forced to beef up security, add panic buttons and install blast film on its windows.

Vancouver police have conducted “active shooter” training at the center.

Noormohamed wouldn’t discuss whether the recent incident targeting him translated to increased security measures for him, his staff and family.

“Obviously, you have to be careful and vigilant, and particularly when you have a family,” he said. “These things are top of mind, and so you take the steps to make sure everyone is safe.”

In his series of tweets last month, he wrote:

“This is another reminder that we cannot ignore the very real threat of ideologically motivated violent extremism and of the harmful rhetoric of the far right. Islamophobia and hatred in all its forms exist in Canada and we need to work together to protect one another and make our communities a safer place to live for all.”

with files from Canadian Press