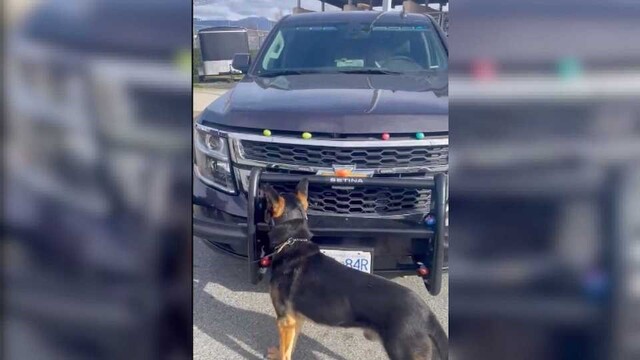 The Easter bunny left a nontraditional surprise for a furry member of the Vancouver Police Department (VPD) over the long weekend.

The VPD Canine Unit shared a video of one of its top dogs sniffing out a heroin-filled egg on Saturday (April 16). The dog, called Cash, reportedly found the opioid-filled egg “in a flash” and was rewarded with “some tasty Easter treats.”

A video shows the talented German shepherd sniffing colorful eggs placed on the front of a VPD vehicle.

The VPD Canine Unit added that “work is just a big game” for the clever canine.

The Metro Vancouver Transit Police have an explosive sniffin’ pooch who looks like a little detective with his distinguished red mustache. Learn more about his story from him and the rest of the transit canine team.

Watch the video below.

The Easter Bunny? came by @VPDCanine and left some surprises for PSD Cash! Including a Heroin filled egg ?which Cash found in a flash….and of course got rewarded with some tasty Easter treats! #HappyEaster #DualPurposeK9 #WorkisJustABigGame pic.twitter.com/Re962n7Qic