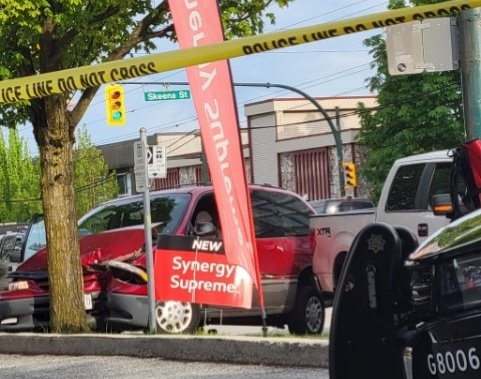 Vancouver police are investigating a bizarre and violent attack at a gas station early Wednesday morning.

Few details are being provided by police at this time but investigators said the incident happened on Hastings Street near Skeena Street.

It appears as though the incident started with a car crash and ended with a suspect stabbing several people.

Witness Justin Lloyd said he was asleep in a nearby apartment when he heard what he thought was a car alarm.

“We looked out the window and realized something bigger was going on,” he said. “It appeared someone had crashed a car.

“I looked out the window and there was a man brandishing a machete and chasing people around the gas station parking lot. One of the people grabbed a rock to try and protect themselves and another person grabbed a garbage bin lid. It was pretty chaotic.”

Lloyd said he was disturbed to see the man hit someone on the ground with the machete.

“I saw it once and I didn’t want to watch it, I turned away,” he added.

Police say one man has been taken to hospital with non-life-threatening injuries.

Police say one man has been arrested and is in custody.

More details are expected to be released on Wednesday.