Rebekah Vardy has suffered “immense distress” as a result of Coleen Rooney’s now infamous “Wagatha Christie” allegations and “had no choice” but to take her to court “to establish her innocence and vindicate her reputation”, the High Court has been told .

vardy is suing Rooney after being publicly accused of leaking “false stories” to the media in 2019and after several months of preliminary hearings the libel trial got under way on Tuesday morning.

The wife of former England star Wayne Rooney was dubbed “Wagatha Christie” after publicly claiming Vardy, who is married to Leicester City striker Jamie Vardy, shared three fake stories, which she posted on her personal Instagram account, with The Sun newspaper.

In written submissions to the court, Vardy’s barrister Hugh Tomlinson QC said that while the case has been trivialized as “Wag Wars” it has had a “very profound” impact on her life, leading to “high intensity abuse and vilification”.

However, in the written argument for Rooney, 36, barrister David Sherborne said his client feels “absolutely confident” in the investigation she conducted to find the source of the leaks and that her “authentication was as thorough as many newsrooms.”

Rooney considers Vardy, 40, “fame hungry” and said her husband had to speak to Jamie Vardy about his wife when both footballers were in the England squad in the Euro 2016 tournament in France, due to Rebekah Vardy’s “excessive media activity”, the written statement says.

• Rebekah Vardy’s lawyer says Coleen Rooney was ‘reveling in the attention and the Wagatha Christie story’ after her social media post went viral
• Rooney’s lawyer says she told no one of her sleuthing, not even her husband Wayne Rooney – who is now listed as a witness
• Rooney accuses Vardy of being The Sun newspaper’s ‘Secret WAG’
• Details of Euro 2016 seat row revealed in court – when Vardy allegedly told Rooney to ‘f*** off’
• The court hears of vile abusive messages sent to Vardy after Rooney published her allegation
• ‘This is a detective story,’ Rooney’s lawyer tells the court – but ‘like any good detective story, you never find a person standing over the body with a smoking gun’

Under English defamation law, Rooney must prove her post was “substantially true”. The full trial is set to last seven days and follows months of preliminary hearings, with her husband Ella Wayne among those listed to give evidence.

Wayne Rooney appeared alongside his wife in court on Tuesday, but there was no sign of Jamie Vardy during the first day of the hearing.

Abusive messages sent to Vardy about her and her children

Details of some of the abusive messages sent to Rebekah Vardy, who was seven months pregnant at the time Rooney made the allegation, were included in her legal team’s written statement, with one saying: “I hope your baby gets put in a microwave.” Another called Vardy a “dirty rotten sl*g” and an “evil wicked rat face b*tch”, and described her children de ella as “f****** gremlin kids”.

Jamie Vardy was also subjected to chants about his wife during football matches, the court was told.

Vardy has “endured very high levels of continued public abuse and ridicule”, her legal team said in the written submissions. “While this case has been presented as trivial ‘Wag Wars’, it has had, and continues to have, a very profound impact on Mrs Vardy’s life of her.

“The allegation made against Mrs Vardy is plainly serious and has been circulated to extraordinary extent, leading to high intensity abuse and vilification… Mrs Vardy is entitled to very substantial award of damages to compensate her for the wrong that has been committed.”

Rooney’s allegation “was and remains false”, Mr Tomlinson’s written argument said. “Mrs Vardy had not leaked information about Mrs Rooney or her friends and family from her to the Sun newspaper from her private Instagram account from her.

“Mrs Rooney did not have the ‘irrefutable’ evidence that she claimed to have had: her so-called ‘careful investigation’ was nothing of the sort.

“If anyone had been leaking information from Mrs Rooney’s private Instagram this was not done with Mrs Vardy’s knowledge or approval.”

He continued: “Mrs Vardy made strenuous but unsuccessful attempts to settle the case but the post was not taken down. As a result, Mrs Vardy had no choice but to bring this libel action to establish her innocence and vindicate her reputation.”

‘Uncovering the truth was imperative’

She is defending the claim on the basis of truth and public interest. Her original allegation of her against Vardy “is not a very serious one, but it is an important one”, her lawyers say. “The leaks had caused a great deal of upset to [Rooney] as well as others, and so uncovering the truth was imperative.”

The case first went to court in November 2020, with a judge finding at that time that Rooney’s post “clearly identified” Vardy – and not just her account – as being “guilty of the serious and consistent breach of trust”.

Since then, several hearings have taken place to prepare for the trial, including one where texts between Vardy and her agent Caroline Watt emerged.

In the most recent hearing before the trial, the High Court was told by Rooney’s barrister that Vardy now “appears to accept” that Ms Watt was the source of leaked stories.

‘That must be concealment’

In his written argument, Mr Sherborne said there are “numerous examples of the claimant and Ms (Caroline) Watt conspiring to pass private and personal information on to the press about other individuals”.

He continued: “In short, the claimant is someone who has secretly provided, or sought to provide, to the press private information which she has been privy to in relation to a number of individuals in the footballing world or other celebrities, and not just the defendant, without their consent.”

However, in April, the court was told that Ms Watt is not well enough to give evidence at the trial. She has also withdrawn a waiver that might have allowed journalists from The Sun to say whether or not she was the source of the leaks.

The court has also been told by Rooney’s lawyer of “widespread and significant destruction or loss of evidence” in the case, which notably included the loss of Ms Watt’s phone in the North Sea.

“The loss and destruction of evidence by [Vardy] and Ms Watt – which, alarmingly, continues to evolve even in recent days – has been flagrant and beyond belief,” Mr Sherborne wrote.

Later in the written submission, he said: “To borrow from Wilde, to lose one significant set of documents may be regarded as a misfortune, to lose two, carelessness, but to lose 10? That must be concealment.” 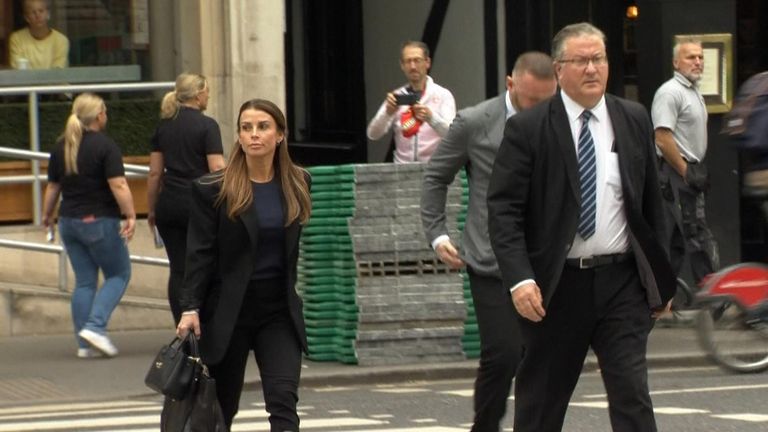 The Rooneys and Rebekah Vardy at court

Vardy’s lawyer has said his client “has no personal knowledge” of her agent’s phone falling into the sea.

“It has not been suggested that Mrs Vardy had any involvement with this and it cannot possibly be relied on as evidence of wrongdoing by Mrs Vardy,” he said.

Speaking to the court on Tuesday, Mr Tomlinson said that Vardy had “trusted her friend” Watt but following the recent developments she now “doesn’t know what to think” and “accepts that it’s possible” that Ms Watt could have been the source of some of the stories.

A case of ‘betrayal’

Mr Sherborne, Rooney’s barrister, said in his written arguments that there is a question the court needs to decide on – was Rooney “betrayed” by Vardy because she knew Ms Watt, “her PR and close confidante”, was leaking Rooney’s private information to The Sun “and condoned this, as well as directly leaking information herself”?

Or was Vardy “betrayed by Caroline Watt because she had leaked this information without Mrs Vardy knowing it and had lied to her by denying all along that she had leaked anything”?

In court, Mr Sherborne told the judge: “You do not have to be convinced beyond reasonable doubt, you just have to conclude that it is more likely than not that Mrs Vardy was responsible, either directly or through Ms Watt.”

Rooney accused Vardy of leaking “false stories” about her private life to the media in October 2019, after carrying out a months-long “sting operation” that involved sharing Instagram posts but secretly blocking all but one account – Vardy’s – from seeing them.

The fake stories included Rooney traveling to Mexico for a baby “gender selection” procedure, planning a return to TV, and the basement flooding at her home.

“I have saved and screenshotted all the original stories which clearly show just one person has viewed them,” Rooney wrote in the internet post that quickly went viral.

Vardy denies the accusations and is suing Mrs Rooney for libel. The trial before Mrs Justice Steyn continues, with a decision expected in writing at a later date.