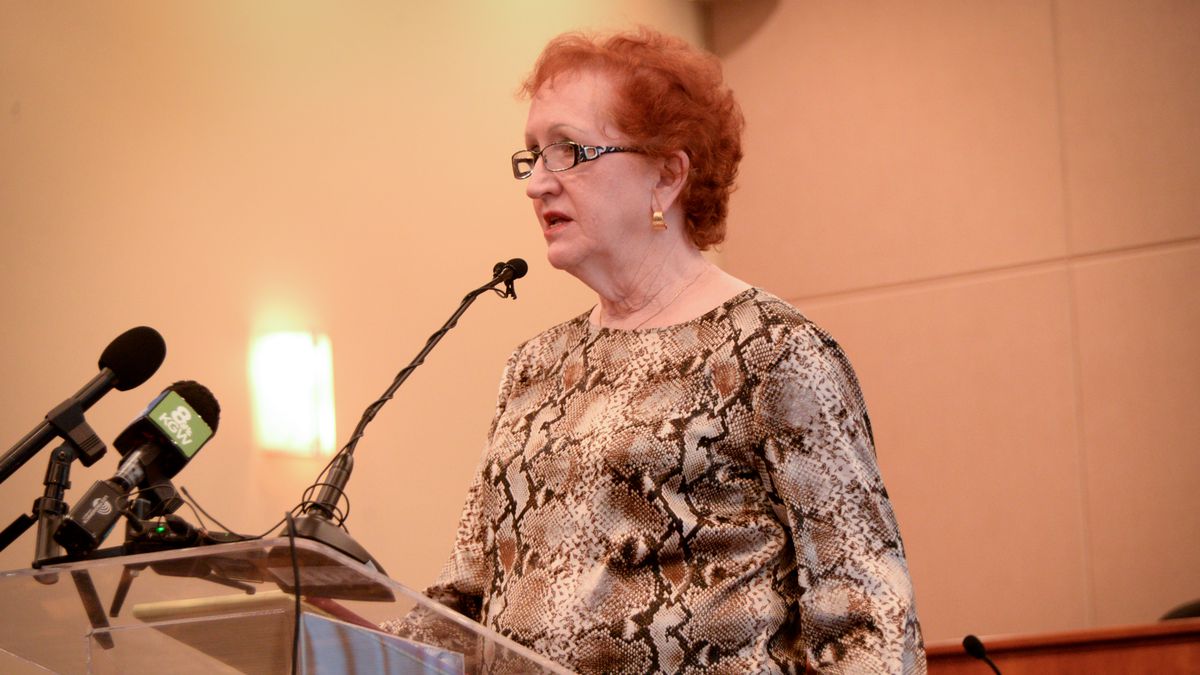 Clackamas County Clerk Sherry Hall has told reporters she had no idea how a representative of Democratic US Rep. Kurt Schrader’s campaign gained access to her office before a rival campaign and members of the general public last week.

But video footage released Tuesday shows Hall was on hand in the office when the access was granted — and appears to have talked with the employee who let the Schrader staffer inside.

The footage, released by Clackamas County after a records request, appears to contradict Hall’s statement to reporters last Friday, when she professed to have no idea how a Schrader representative accessed the building prior to 8:30 am, the earliest point public election observers were supposed to enter the building

“We all come in that door, and it’s possible someone used their badge to get in, and someone else might have followed them in,” Hall said in a meeting with reporters on Friday, also suggesting an employee in a department other than the elections office might have been responsible.

Later in the same meeting, Hall said: “I don’t know how someone got in at 7 on the day that’s being talked about. We don’t know yet.”

Surveillance camera footage shows an elections office employee, identified by county staff as Tiffany Clark, entering the building at 7:34 am on May 19. She appears to have a brief conversation with a man holding a briefcase, before entering alone.

Though camera angles of all of Clark’s movements were not provided, the footage shows her entering another door and roughly 30 seconds later exiting with Hall. Clark then returns to the building entrance and beckons to the waiting man before allowing him in. Hall is not seen again in the five-minute video.

Hall did not immediately respond to an inquiry about the video and her earlier comments. Asked Tuesday morning about Hall’s remarks about her last week, a spokeswoman for the Schrader said: “I guess she forgets easily.”

While there’s no indication that Schrader’s campaign was able to do anything but observe election workers, the early access prompted a complaint to state elections officials from the campaign of Jamie McLeod-Skinner, who appears to be on the verge of defeating Schrader.

McLeod-Skinner’s complaint said a member of her staff arrived at the elections office at 8:05 am and rang the bell at the public-facing entrance, but was not let in until the building opened at 8:30 am They said the incident amounts to unfair treatment and a breach of state election law.

“It’s absolutely outrageous to stand in front of the public and to say one thing and then to have a video showing something very different,” Fagan said. Her office de ella is investigating McLeod-Skinner’s complaint.

The incident amounts to another black eye for Hall as she grapples with accusations she badly bungled the primary.

As of Tuesday, Clackamas county had reported votes from 57,550 ballots, roughly half of those it has received for the May 17 election, according to the county’s elections website.

The delay appears to be a mix of bad luck and poor administration. Hall revealed in early May that a large portion of the ballots sent to voters had misprinted barcodes that would make them unreadable to the vote tallying machines used by the county. Hall has since acknowledged she did not act with enough urgency in light of that news, and so she did not have the appropriate staff on hand to efficiently duplicate errant ballots for tallying. The extent of the problem didn’t become clear until Election Night, when the state’s third-most populous county could only reveal a trickle of results.

In the week since, county commissioners, state lawmakers, Fagan and Oregon US Rep. Earl Blumenauer have sharply criticized Hall’s handling of the printing snafu.

Fagan said Tuesday she was still waiting for a detailed timeline from Hall’s office as to when the state could expect finalized results. She suggested she’s done everything within her power to assist Clackamas County in processing its ballots.

“It is time for us to see that written plan,” Fagan said. “We have been hearing about it for several days now. That plan will show where they expect to be every single day. We can all hold them accountable.”

With tens of thousands of votes left to count as of Tuesday, many candidates are still waiting for a meaningful chunk of results.

That’s particularly true in the Democratic primary in the 5th Congressional District, where the latest results show McLeod-Skinner with a sizable lead over Schrader, a seven-term incumbent. Because roughly half the Democrats within the newly reshaped district live in Clackamas County, news organizations have been slow to officially call the race, and Schrader’s campaign said Tuesday morning it was still not conceding.

But as more results have come out in batches of roughly 5,000 to 10,000 ballots per day, more and more people are becoming comfortable declaring McLeod-Skinner the victor in the district, which on paper leans slightly Democratic.

On Tuesday, Dave Wasserman, an analyst with the Cook Political Report, tweeted that the race was over, in his eyes. The Oregonian/OregonLive has noted that the math is exceedingly bleak for Schrader.

Meanwhile, Hall could face trouble of her own at the ballot box. The independently elected official is running for another term in November, and is facing a challenger, Catherine McMullen, who has hammered her for the ballot problems.