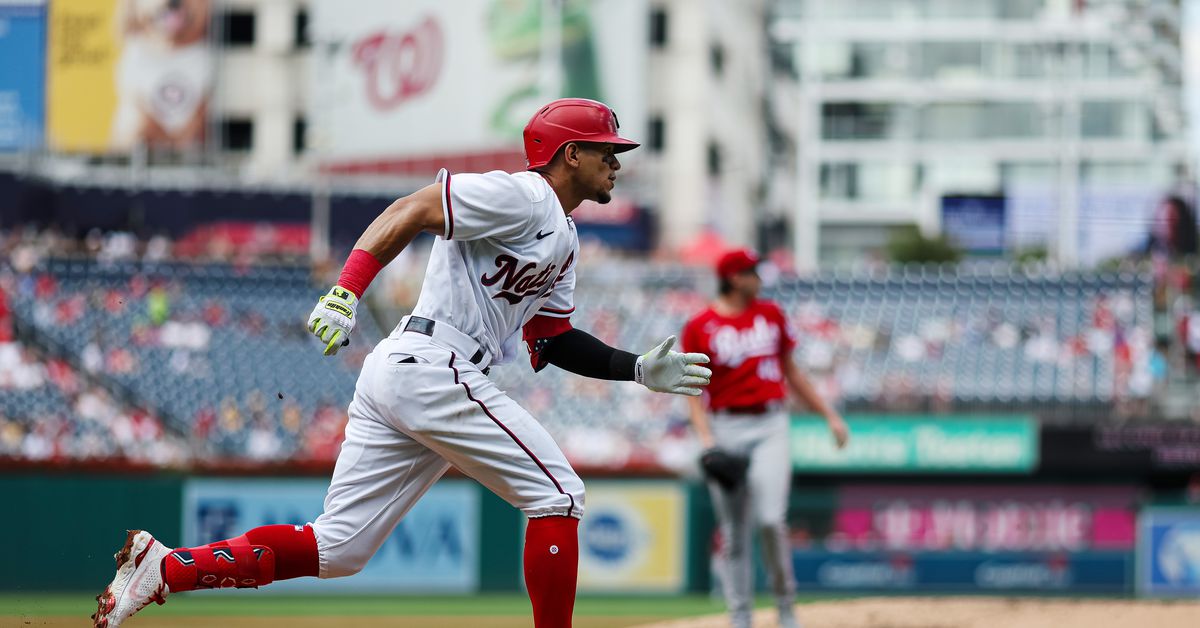 In two starts back following an extended, 10-day break between outings, Patrick Corbin had given up 15 hits, four walks, and six earned runs in 11 1⁄3 innings pitched, (4.76 ERA, 5.42 FIP), with opposing hitters putting up a .326/.380/.522 line against the left-hander. Nats’ skipper Davey Martinez told reporters after Corbin gave up nine hits, two walks, and two runs, both earned, over 5 1⁄3 IP against the San Diego Padres in the second of two starts after the reset, he would take what the southpaw gave the team over his last two outings.

Trying to build on those outings, Corbin took the mound today to face the Reds in the third of three with Cincinnati in DC, and gave up back-to-back singles in the first two at-bats of the game, with Jonathan India and Alejo Lopez both singling to right field.

A misplay in right by Joey Meneses allowed India to take third on Lopez’s hit, and he scored on a ground ball to short off Kyle Farmer’s bat, 1-0 Reds.

Corbin held it there through four, and took the mound in the fifth in a 2-2 game, after the Nationals rallied for two in the home-half of the fourth.

After a 17-pitch frame, in which he worked around a two-out single, Corbin was up to 69 pitches when he came out for the top of the sixth with a 3-2 lead courtesy of a go-ahead home run by Ildemaro Vargas in the bottom of the fifth.

A first-round pick by the Reds in 2019 (7th overall), Nick Lodolo made his MLB debut in mid-April this season, but missed two months after suffering a back injury at the end of the first month of the 2022 campaign.

Given a 1-0 lead to work with before he took the mound, and a 2-0 lead in the second, the left-hander started strong with three scoreless frames in which he faced the minimum.

In the fourth, however, a leadoff double by César Hernández and back-to-back HBPs (on both Joey Meneses and Luke Voit), loaded the bases with no one out, and Nelson Cruz stepped in next, and took a close 3-2 pitch for ball four and a walk, forcing in a run which cut the Reds’ lead in half, 2-1.

With the bases still loaded, Lane Thomas lined out sharply to third for the first out, and CJ Abrams K’d looking for out No. 2, but Riley Adams came through with a two-out RBI single, 2-2, driving in Meneses before Voit was thrown out trying to score the go-ahead run.

Via the Nationals’ pregame notes for today’s series finale:

According to the Elias Sports Bureau, 43 straight games played without earning a win by a starting pitcher is the longest such streak in Major League Baseball history.”

It was Patrick Corbin’s turn to try to snap the streak this afternoon, and the oft-maligned (fairly) starter [SPOILER ALERT!] did the job. It’s over. Take a deep breath.

A Nats’ starter got a “meaningless” W.

Hunter Harvey took over for the Nationals with a one-run lead in the top of the seventh, and worked around a leadoff single for a scoreless frame to keep it 3-2 in the Nationals’ favor.

Carl Edwards, Jr. needed nine pitches to get through the top of the eighth.

Kyle Finnegan got the ninth and retired the side in order to end it.