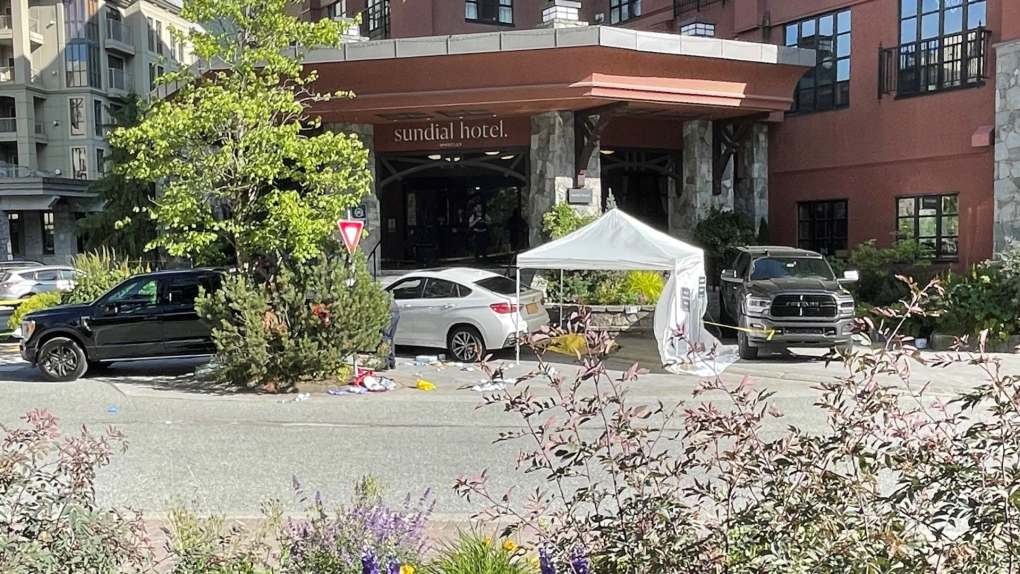 Warning: The details and images in this story may be disturbing for some readers.

Victims of brazen double homicide in Whistler, BC, identified

WHISTLER, BC – Warning: The details and images in this story may be disturbing for some readers.

The Integrated Homicide Investigation team has identified the victims of a brazen shooting in Whistler, BC

Two men were shot outside a hotel in the busy village in broad daylight Sunday.

HIT has confirmed it was a targeted shooting and is linked to the ongoing Lower Mainland gang conflict.

Video posted to social media shows two bodies on the ground just outside the Sundial Hotel, one is surrounded by blood.

One died on scene, the other succumbed to his injuries in hospital.

Investigators have identified the victims as Satindera Gill and Meninder Dhaliwal.

Both were known to police, however Dhaliwal was a high-profile gangster.

He was one of 11 men the Combined Forces Special Enforcement Unit, the RCMP’s anti-gang squad, warned the public to steer clear of in May 2021.

“They pose a serious threat to your safety. We ask the public to familiarize yourselves with these photos, and if you see them, contact the police,” said Sgt. Brenda Winpenny at the time.

The 29-year-old’s younger brother Harb was also gunned down in a targeted hit in Coal Harbor last year.

Their brother Barinder was captured on camera crying out as police held him back from the crime scene.

One died on scene, the other succumbed to his injuries in hospital.

A burning vehicle believed to be linked to the shooting was found a five-minute drive away on Ptarmigan Place.

“As a result of the dynamic response and rapid evidence collection by officers, Sea-to-Sky RCMP were able to locate and apprehend multiple individuals,” said Sgt. Timothy Pierotti, of IHIT.

The shooting happened just steps from the Whistler Village Gondola.

Greg Janz could see one of the bodies under a yellow tarp from his hotel room across the street.

People in the village were told to shelter in place as police responded.

“Though this was a brazen daytime shooting in a busy village, there is not believed to be any further risk to the public, thanks to the quick response of the Sea-to-Sky RCMP members,” said Pierotti.

Anyone who was in the area of ​​Sundial Crescent or Blueberry Drive, where the burning vehicle was located, between 8:00 am and 1:00 pm with dash camera video is asked to contact IHIT immediately.