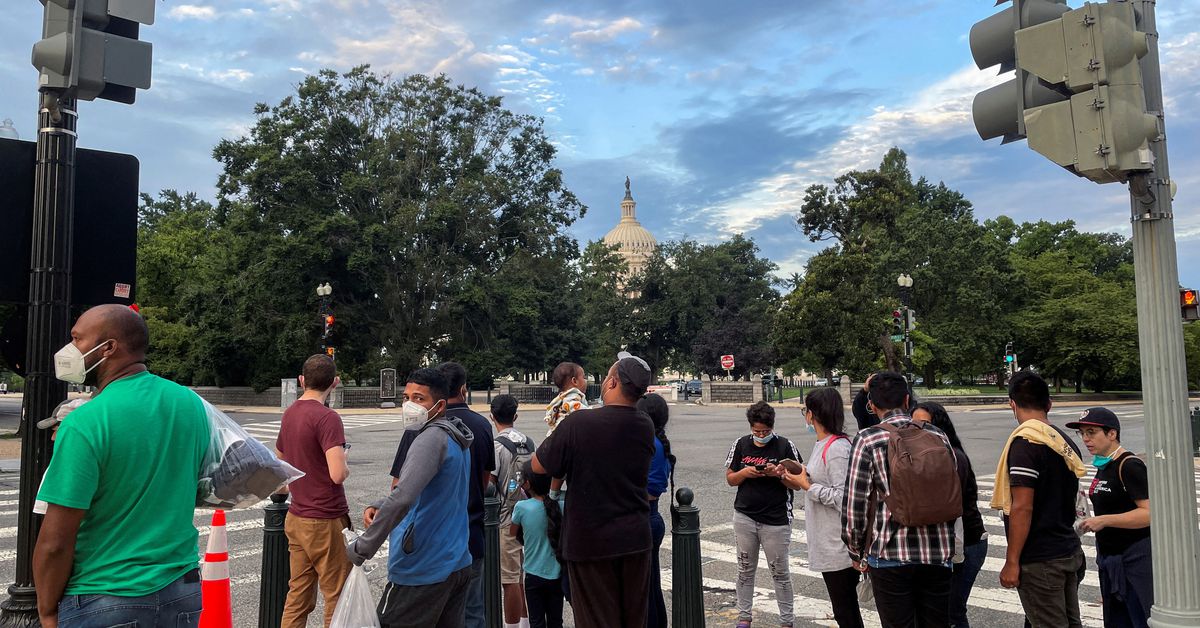 WASHINGTON, Aug 3 (Reuters) – Thousands of migrants bused to Washington in recent months by Republican governors of states on the US-Mexico border have caused tensions between the White House and the Democratic mayor of the US capital city, four US officials told Reuters .

“What people actually need is housing, transportation to their next cities, legal services and direct social services, which the military isn’t really trained to do,” said Ashley Tjhung, a 24-year-old volunteer.

The vast majority of migrants arriving in Washington spend only hours or days there before heading to other US destinations, according to an ad-hoc network of volunteers.

Republican governors Greg Abbott of Texas and Doug Ducey of Arizona have sent around 7,000 migrants in recent months, the states said. read more

Just after sunrise on Friday, about 30 migrants disembarked from a charter bus near Washington’s Union Station after a 36-hour ride from Del Rio, Texas, carrying their scant belongings in clear plastic bags.

The group included adults and families with young children traveling from Venezuela, Colombia, Nicaragua and Cuba. They walked to a nearby church, taking photos of the US Capitol building and Supreme Court along the way.

In the church basement, volunteers offered them breakfast, toothbrushes and clean clothes as they asked about medical needs and assisted with onward travel to New York, North Carolina and Florida.

“We have had constructive conversations with Mayor Bowser and her team,” a White House spokesperson told Reuters. “As we have said repeatedly, Republican governors using desperate migrants as political tools is shameful.”

Bowser’s office did not respond to requests for comment regarding the tensions. In a July 22 letter to White House officials, Bowser said the issue “must be dealt with at a federal level.”

Other US cities absorb thousands of migrants without the assistance of military troops. Since Biden took office there have been a record-breaking 3 million migrant arrests at the US-Mexico border; many are repeat crossers who are quickly expelled. During the same period, hundreds of thousands of migrants have been allowed into the country and then often start the process of claiming US asylum.

White House officials disagree with Bowser’s portrayal of the migrant arrivals as a “crisis,” which echoes Abbott’s language about the border, three officials and another source familiar with the matter said.

“The message and the optics aren’t what the White House wants to hear or see from a larger Democratic,” said one US official who, along with others, requested anonymity to discuss the internal consensus.

Senior Biden adviser Julie Chavez Rodriguez had been working with Bowser, the person familiar with the matter said, which made the request for troops even more irksome.

Washington is not a US state or part of one, so the authority to summon National Guard troops rests with the US military. Defense Secretary Lloyd Austin is taking Bowser’s troop request “very seriously,” according to a spokesperson.

On Friday, volunteers in Washington bought same-day bus tickets to New York City for several arriving migrants, including one Venezuelan family that had the address of a Bronx shelter intake center scrawled on a piece of paper.

A small number of the arriving migrants did say they planned to stay in Washington.

Among them was Colombian couple Juan Camilo Mendoza and Noralis Zuniga, who were traveling with their one-year-old daughter Evangeline. They arrived in Texas after a grueling three-month journey that took them through the Darien Gap, a lawless stretch of mountainous jungle between Colombia and Panama where migrant traffic has jumped in recent months. read more

The couple do not have family or friends in the United States and came without a set destination, a growing phenomenon among those arriving in Washington, according to one volunteer.

“We only said, ‘We’re going to the United States.’ We didn’t have a city,” said Mendoza, a 24-year-old construction worker. “If we can find work, we’ll stay here.”