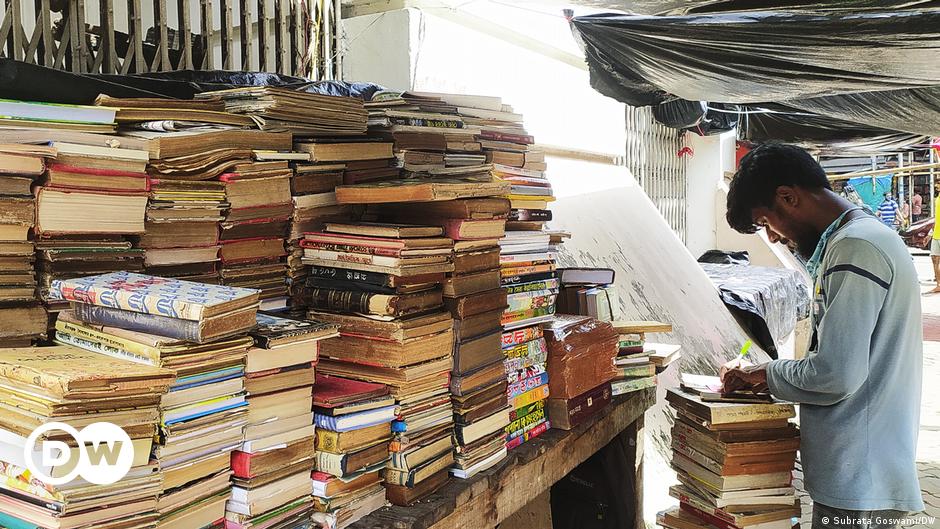 India’s book publishers are facing new challenges after the COVID pandemic because of the high cost of raw materials and soaring inflation.

Inflation, driven by high food and fuel prices, reached an 18-month high of 7.5% in April in India, according to a Reuters poll.

Publishers from across the country — for English and regional languages ​​— say they have faced an acute shortage of paper and higher production costs for some months now. As a result, they are being forced to hike the prices of books.

Around 80% of books in India are published in Indian languages, according to a 2007 publication by the Federation of Indian Publishers (FIP).

The average Indian spends less than $5 (€4.80) on a single book published in an Indian language. But there is a lack of data on the actual number of books published.

The British Council published a report in February called the “Indian Literature and Publishing Sector,” to make note of the challenges facing the Indian publishing world.

In the report, researchers noted that a 2007 study by the Federation of Indian Chambers of Commerce and Industry (FICCI) found that half of the titles published in India were either in Hindi or English.

The FICCI report also said that around 90,000 titles were published every year. Researchers of the British Council report pointed to the “sporadic” tracking of the sector since there was no study undertaken on a regular basis.

A 2015 book market report by Nielsen India estimated the Indian book market to be worth $3.9 billion (Є4.7 billion) and growing by around 20% each year.

Alind Maheshwari, a director of Rajkamal Prakashan Group, a notable publisher of Hindi-language books, said they couldn’t publish as many books as they did before the pandemic.

“Paper used to cost around 60 rupees ($0.77) per kilogram, and now costs 110 rupees per kilogram. It nearly doubled,” Maheshwari told DW.

Delhi-based Rajkamal Prakashan used to publish around 200-250 books a year before the pandemic. Now, they publish just 72-100 books a year, including translations of English books.

Maheshwari explained that book distribution channels have been substantially impacted since the pandemic posed a challenge to book distributors or those responsible for supplying new books to stores.

Satabdi Mishra, co-founder of Walking BookFairs in the eastern state of Odisha, said it was becoming increasingly expensive to print books with “the price hike in printing and transport services.”

The publication of some books was also put on hold because of the pandemic and “finally when we got around to publishing it, prices had gone up significantly,” Mishra told DW.

A global shortage of shipping vessels and heightened shipping costs in December of last year contributed to some of the rise in production costs.

Indian paper mills were also forced to cut down operations to two to three times a week, industry experts said.

Arpita Das, the publisher of the independent Yoda Press for English-language books, said a hike in book costs has put pressure on the company because they “like to keep prices low enough for avid readers to be able to afford books.”

Thomas Abraham, the managing director of Hachette India, one of the five big publishing houses in the country, said Indians largely read for utilitarian purposes and less for entertainment purposes.

In the UK and US, new titles usually do well with readers. But in India, “it’s the exact opposite,” Abraham told DW. People generally read a lot of older titles like books by Enid Blyton or Agatha Christie.

“The country is losing its bibliodiversity,” — diversity in the kinds of books people read, Abraham added.

A combination of changing reading habits and increasing costs of publishing meant that many publishing houses had to do away with the so-called experimental or mid-list books, which are not high priority because they only have a specific readership.

The Neilsen book report added that e-reading devices didn’t find too many buyers in India. However, the pandemic changed the scenario because people began buying more e-books on Amazon, specifically in the first period of the lockdown in 2020.

Big publishing houses said e-book sales doubled during that time, but there was a caveat.

Even though e-book sales doubled, they contributed very little to revenue because they could not make up for the losses incurred during the first four months of lockdown in 2020, Abraham of Hachette explained.

Others have taken matters into their own hands in a decisive fashion.

Mishra of Walking BookFairs said her company is selling one of their latest books — a collection of short stories by diverse Indian authors — “only at local, physical bookstores throughout India — to support local bookstores — and it is not available for sale on Amazon or Flipkart.”