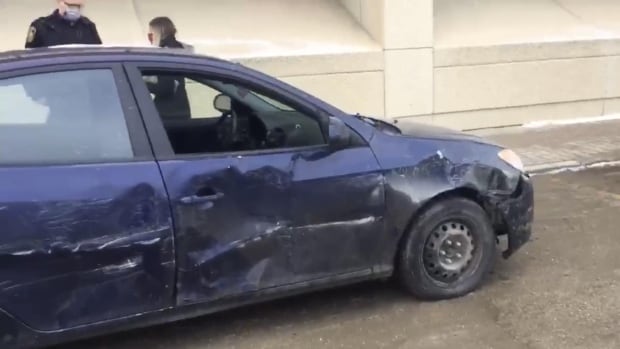 A Winnipeg man whose acts of road rage wound up making international news will serve 10 months in jail and is prohibited from driving for three years.

Dale Ward Harper, 59, learned his fate in a Winnipeg courtroom this week after previously pleading guilty to assault with a weapon and dangerous driving.

“Drivers cannot be allowed to use their vehicles as weapons simply because they let their anger and frustration get the better of them,” provincial court Judge Lee Ann Martin said in a written decision.

“The circumstances of the offending in this case were certainly frightening and dangerous.”

Martin shot down a request from the Crown prosecutors to put Harper — who had no prior criminal record — behind bars for three years.

Harper used his Ford F-150 truck to tail and repeatedly batter a smaller Hyundai Elantra driven by Kiana Jobo, with her father as a passenger, on the afternoon of Dec. 17, 2020.

Mobile phone footage of Harper’s conduct wound up being picked up and broadcast widely by the tabloid website TMZ.

Kiana Jobo and her father were driving when an angry man they didn’t know followed them in his truck for 10 minutes, ramming their car on all sides.

Jobo was driving west on Sargent Avenue when she crossed paths with Harper at the intersection of Sargent and Milt Stegall Drive. Harper honked at Jobo as she tried to turn left and she “hand-gestured in a manner that Harper found impolite,” Martin said.

Harper drove after Jobo, ramming her car and sending it spinning around. He then followed her for 10 minutes over about three kilometers through busy traffic, ramming her car de ella several more times, even pushing it into another vehicle and the median, Martin said.

Jobo managed to get away after driving into oncoming traffic to the RCMP station on Portage Avenue. Harper drove home and was arrested by Winnipeg police shortly after.

“He immediately admitted his actions, stating that he didn’t know what came over him and that he had never done anything like that before,” Martin said.

The impact of the crime on Jobo was severe. She told CBC in an interview a few days after it happened that it had stolen her sense of security and left her traumatized — comments she and her father echoed her when addressing the court during Harper’s sentencing hearing.

“It is clear that they are extremely angry at Harper,” said Martin. “They believed at the time that Harper meant to kill them.”

Martin noted while the Jobos were not physically injured, the psychological impact has been “long-lasting.”

Manitoba Public Insurance wrote off Jobo’s car as a result of the damage.

Harper was a career military man until retiring due to health issues a few months before committing the crime.

“He is described as a gentle, caring and giving individual, assisting his neighbors regularly and volunteering with the Special Olympics since 2011,” Martin said.

Harper could not explain why he did what he did, the judge said. She noted he immediately started counseling for anger management after the incident.

“Harper is deeply remorseful for his actions. He apologized in court and shared that every night he wakes up at 2 am and ponders his actions,” Martin said.

Crown attorney Paul Cooper argued Martin needed to hand Harper a years-long sentence because of a “high incidence of road rage in Winnipeg” and the need to show others it won’t be tolerated.

Martin said there was no evidence to make a finding of a prevalence of road rage in the city. Harper’s actions were not “planned and deliberate,” she found.

“Given his lack of prior record, upstanding pro-social conduct during his life and uncharacteristic actions, together with the counseling report filed in court, I find that his conduct was not planned.

“Rather, it was a precipitous, uncontrolled burst of anger that took Harper some time to [rein] in,” Martin said.

Harper must also serve a year of supervised probation after his sentence expires, which includes a condition to attend counseling as directed by his probation officer.