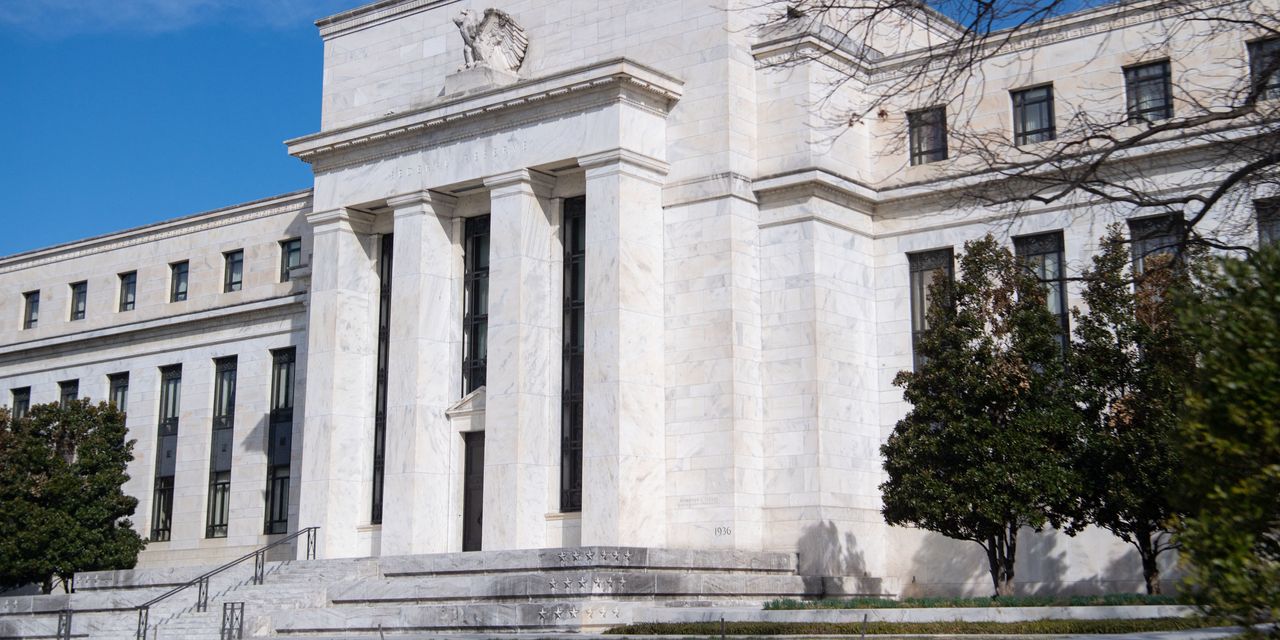 Traders are preparing for a US consumer price index report next week that’s likely to show an annual headline rate above 8% for the first time since January 1982 — a development that would raise fresh questions about the Federal Reserve’s early plans for shrinking its balance sheet.

Those tentative plans, revealed in the Fed’s March meeting minutes on Wednesday, are to reduce the central bank’s almost $9 trillion portfolio by up to $95 billion each month, following a phase-in period, in order to combat inflation. Investors and traders continue to assess what the likely impact of that process, known as “quantitative tightening,” will be: Treasury yields traded mixed Thursday after a relatively modest reaction to the minutes in the prior session. Meanwhile, DJIA stocks,

struggled for direction in afternoon trading.

Read: Quantitative Tightening Could Set Off a Lengthy Tantrum

For traders and investors, the impact of shrinking the Fed’s gargantuan portfolio has been hard to quantify because it’s only been done one other time — from 2017 to 2019, when inflation was comparatively low. At the moment, there’s no clear view on how much rolling off maturing Treasurys and mortgage bonds will tighten financial conditions and approximate rate hikes. It’s the “million-dollar question” facing financial markets right now, said Jason England, global bonds portfolio manager at Janus Henderson Investors in Denver.

“Next week’s challenge for the government bond market is deciding the reliability of the QT outline from March minutes,” Jim Vogel, executive vice president of FHN Financial in Memphis, wrote in a note Thursday. “It will only take two Fed speakers suggesting QT isn’t fast enough to scare the bond market witless again. Throw in an above-expected CPI number next Tuesday and it will only take one Fed official on the tape.”

Next Tuesday’s CPI report is likely to show a headline, year-over-year gain of 8.6% for March, according to the implied levels of derivatives-like instruments known as fixings. That would follow a 7.9% reading for February, which marked the 11th straight month in which inflation came in well above the Fed’s 2% target. Traders expect April’s reading to be 8.2%.

“Any inflation data can create doubts about what the Fed has outlined for quantitative tightening for the rest of this year,” Vogel told MarketWatch in a separate phone call. “You have to be prepared for surprises that send rates higher and make the curve steepen. And you have to start assuming the worst any time a Fed thought leader comes out with what sounds like warnings.” Such a warning is what Fed Governor Lael Brainard’s Tuesday comments amounted to.

In a speech at a conference, Brainard shook up markets when she said that inflation is “much too high,” and said she saw a need for the Fed to start reducing the balance sheet “at a rapid pace” as soon as May. Her remarks from her reflected a sense of urgency on inflation that she had n’t previously been factored in, sending 2-year TMUBMUSD02Y,

Treasury yields to their highest levels in three years.

Fed minutes are inherently backward-looking and reflect what policy makers were thinking as of their last meeting, which was on March 15-16. That makes next week’s CPI release a risk which could render the $95 billion monthly balance-sheet runoff figure outdated.

On Thursday, however, St. Louis Fed President James Bullard said that while the Fed was “behind the curve” on inflation, the central bank is not as far behind as some suggest. He also pointed to the fact that Fed officials have “barely lifted a finger,” and yet have been able to use communications to increase Treasury yields—which tightens financial conditions.

“One thing this Fed has done is telegraph every move,” England of Janus Henderson said via phone Thursday. “And the bond market is kind of taking it in stride. But it seems that almost daily, Fed speakers are being more hawkish and ramping up the program of stomping out inflation.”

“There could be more hiccups on CPI and I don’t think we’ve reached peak hawkishness by the Fed yet,” England said. “A soft landing is going to be very hard to pull off and the odds of a recession are growing, perhaps for the back half of 2023 or in 2024.”