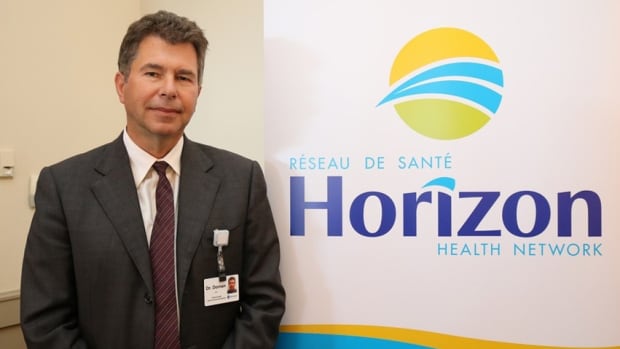 The former CEO of Horizon Health wanted to move the province’s hospitals back to the “red phase” of COVID-19 measures just days before he was fired from the job.

Dr. John Dornan said in an email on July 11 that “a seventh COVID wave is amongst us,” with hospitalizations and staff outbreaks increasing.

A Horizon infectious disease and infection protection control committee was “recommending moving to Hospital Red phase next week if numbers continue to deteriorate,” Dornan wrote in the email obtained by CBC News.

Dornan wrote that officials “could make that call collectively on Monday or Tuesday next week,” referring to July 18 and 19.

The red phase move never happened, even though the numbers did continue to deteriorate.

A major element of red phase protocols would be a ban on routine visitors seeing patients in hospitals.

In his email, the then-CEO said moving to the red phase was “contingent” on Vitalité and Public Health agreeing to it.

But Chief Medical Officer of Health Dr. Jennifer Russell said Wednesday she had no insight into why there was no move to red.

“I don’t want to speak for the RHAs. They are the decision-makers in this case, so they’re the authority on what happens in their own operations,” she said.

Dornan said in the July 11 email it was “probable” Horizon would communicate the possibility of a move to the red phase “publicly this week as a heads up. It is good to be transparent.”

At the time of Dornan’s firing, Premier Blaine Higgs said a change in leadership was needed to break a “bureaucratic stalemate” in the health system and push forward reforms to address long wait lists and clogged emergency departments.

Higgs made the changes after the death of a patient who was waiting for care in the emergency department at the Dr. Everett Chalmers Regional Hospital in Fredericton.

Vitalité vice-president of medical services Natalie Banville replied to Dornan’s July 11 email that she had spoken to CEO France Desrosiers, and officials at the health authority wanted to “analyze the situation more closely.”

She said cases were increasing but only two of Vitalité’s 17 admissions were “COVID related.”

“We need to look more closely at the epidemiology and zone situation before moving to the red phase,” Banville wrote, saying Vitalité’s leadership would meet July 12 and respond with a recommendation.

Dornan thanked her and said Horizon would “strive to be on the same page.” It’s not clear what Vitalité ended up recommending the next day or why Dornan’s replacement, interim CEO Margaret Melanson, did n’t follow through with his plan.

Unlike Dornan, Desrosiers remains in her position as CEO of Vitalité.

Dornan turned down an interview request from CBC News about his email. “I have no comments,” he said Wednesday.

In a statement to CBC News, Melanson said Horizon has “gained more knowledge of the virus” during the pandemic and can now adopt “more targeted and flexible” measures while maintaining important services and allowing visitors.

The statement did not address why Dornan felt differently and favored a full move to red phase less than four weeks ago.

Three days after his email, and one day before his firing as CEO, Dornan encouraged Horizon staff in an internal memo to “consider showing an example” by masking in indoor public spaces due to “escalating” COVID-19 transmission.

A spokesperson for the Department of Health said on July 18 Dornan’s firing was “not related” to that memo.

Horizon and Vitalité moved to the red phase Dec. 31 during a surge of Omicron cases. They returned to the orange phase on June 20.

Dornan’s July 11 email referred to a “seventh wave” arriving, even though the province’s public health officials have been reluctant to use the term.

Russell told Brunswick News July 12 she might not define future increases in cases as waves.

“I don’t want to call it a wave in a sense that everybody defines that differently. I’m saying it’s an increased number of cases,” she told the newspapers. “Whether it’s a wave or not a wave, we’re seeing an increased activity level in COVID cases.”

Between July 10 and 16, the same week Dornan wrote the email and was fired, 30 people were newly admitted to hospitals because of COVID-19, up from 15 the previous week.

That number jumped again to 40 people between July 17 and 23.

As of July 16, Horizon and Vitalité had 84 active hospitalized COVID-19 patients. It increased to 90 a week later.

The number of weekly new cases dropped last week for the first time in weeks. Those numbers tracked infections from July 17-23 and officials said that could indicate that hospitalization numbers, which lag behind cases by a week or two, would soon peak and start to come down as well.

In new numbers released Wednesday for July 24-30, the number of weekly new cases dropped again and the number of hospital admissions and active hospitalizations for COVID-19 decreased slightly.