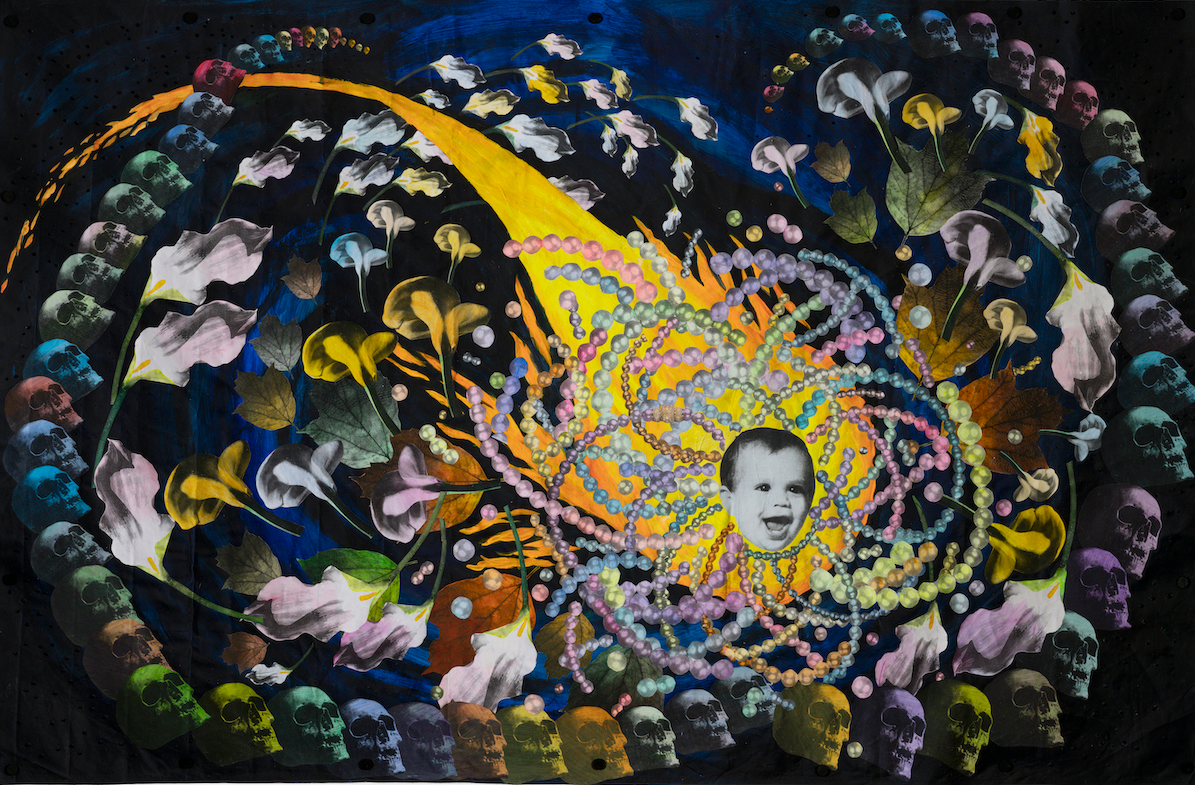 Unlike their counterparts on the East Coast, most galleries in Los Angeles don’t slow down or close up in August, despite the sweltering heat. The exhibitions below offer vibrant and challenging explorations of place, identity, and history. Some dig deep into the geographic and cultural fabric of the city, while others introduce artists from across the country and the world, whose work compliments the buzzing energy of summer in the city.

Fans of nineties indie rock will no doubt be familiar with Steve Keene, whose paintings appear on the covers of albums by Pavement, the Silver Jews, and the Apples in Stereo. Keene is no niche artist, however, but rather a wildly prolific painter, who has produced 300,000 paintings over the past 30 years, which he sells for as little as $5 to $10 per piece. He mass produced his works by him in an assembly-line fashion, painting the same image on multiple panels lined up in “the cage,” his chain-link walled studio filled with paint, brushes, and plywood. Timed to coincide with the release of his first monograph of him, The Steve Keene Art Bookthe Steve Keene Art Show is a career retrospective featuring hand-painted multiples, a site-specific mural, and rarely-seen early work from this “Johnny Appleseed of art,” as Elsa Longhauser, founder of the ICA LA, dubbed him.

Rae Klein’s haunting, dreamlike paintings feature familiar objects—a horse, a candelabra, a pair of eyes—but the juxtapositions offer little in the way of explanation. Rather, her de ella spare, her surreal compositions invite the viewer to construct their own narratives, like a Rorschach or rebus.

Blake Daniels’s paintings in Triumph of the Southern Suburbs reflect the artist’s experience in the queer communities of Johannesburg but avoid direct depiction. They imbue their scenes of street vendors, landscapes, and domestic life with elements of magical realism and fantasy, expressed through vibrant, buzzing colors, and animated brushwork.

Ozzie Juarez cut his teeth as a scenic artist at Disneyland, where he used his painting and fabrication skills to create compelling fantasy environments. That background is evident in Underhis first solo show at Ochi Projects, which draws on pre-Columbian Mexica codices, street art, and geometric abstraction. Painting on stucco-textured ground, found car parts and awnings, Juarez weaves Nahuatl symbols from the codices into neon and pastel patterns that stretch across borders and time to imagine an alternate anti-colonial future.

All Opposing Players is a group exhibition curated by the Racial Imaginary Institute, which was founded by Claudia Rankine in 2016 with the goal of challenging how we think about race. It features video, performance, and works on paper by Lotte Andersen, Ed Fornieles, and Shaun Leonardo that explore the theme of nationalism through the frame of games, role-playing, puzzles, and sport.

Face is a celebratory group exhibition featuring artists from the US, Mexico, and Puerto Rico who explore themes of identity and selfhood in their work. Curated by Ever Velasquez, the show — whose title translates to “face” — considers both the surfaces we present to the world and those facets that we keep hidden. What does it mean to offer a bold, unapologetic version of yourself to an often hostile world? Participating artists include Danie Cansino, Hely Omar Gonzalez, Patrick Martinez, Joey Terrill, and many others.

For LA-based artist Andrea Bowers, art and activism are inseparably linked. Her current retrospective of Ella at the Hammer Museum features three decades of her work that advocates and agitates around issues such as environmental justice, women’s rights, immigration, and labor struggles. The work ranges from drawing and sculpture to installation and performance, and connects the dots between art history and popular protest.

Jerry Peña’s painted mixed-media works incorporate car parts, beer cans, work gloves, cement, and broken glass, reflecting his lived experience as an Angeleno from a working class, Mexican American background. He brings these elements together in compositions that recall the junk assemblages of Kienholz and the poetic combines of Rauschenberg as much as auto-body shops and custom car culture, ubiquitous features of the city.

Regeneration: Black Cinema 1898–1971 showcases the work of Black American filmmakers, actors, and entertainers, reframing narratives often excluded from mainstream film history. The exhibition spans from the birth of film to the end of the Civil Rights Movement, focusing on those who worked both within and outside the Hollywood system. It highlights William Selig’s recently rediscovered 1898 short film “Something Good – Negro Kiss”; iconic dancer, singer, and actor Josephine Baker; and fiercely independent director Melvin Van Peebles, whose 1971 film “Sweet Sweetback’s Baadasssss Song” is a cornerstone of the blaxploitation genre.

art for the people is a career retrospective of the work of influential Chicana artist Margaret Garcia, whose paintings offer an intimate, honest portrayal of her city, community, and family. With nods to Fauvism and Impressionism, Garcia’s paintings by ella range from street scenes of her Boyle Heights neighborhood to portraits of her circle of friends and collaborators, and reinterpretations of Mexican Catholic religious imagery. The exhibition also includes prints from her de ella “Stamp Project,” a suite of black-and-white serigraphs by Garcia and other artists that was an attempt to exert greater control over the means of producing, distributing, and selling art.