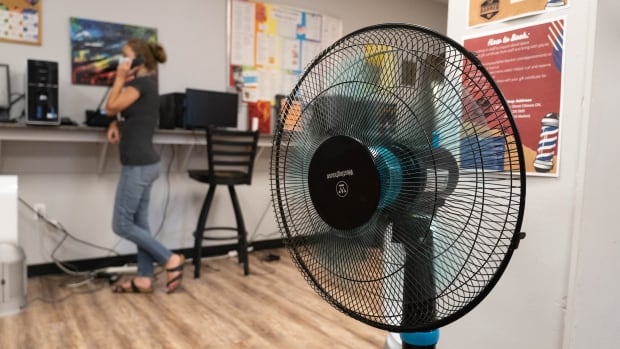 A drop-in center for youth experiencing homelessness in downtown Ottawa is appealing to the community for donations, water bottles and temporary hosts for some of its programs as it deals with a failing air conditioning system.

Operation Come Home has set up portable air conditioners and fans to try to keep the temperature manageable at its Gloucester Street location, where they offer drop-in, employment and mental health services.

Edward Luther, a peer support and drop-in worker, said young people attending the center are asking for cold water and summer clothes, but it’s a struggle to offer support when it’s so hard to beat the heat.

“Sometimes [inside] here is hotter than outside,” Luther said.

The non-profit moved some of its programs a couple blocks south to Carleton Dominion-Chalmers Center as temperatures rose this week.

Executive director John Heckbert said the air conditioning unit of the Gloucester Street headquarters is at the end of its working life after more than 30 years.

He said they called for repairs last month, but a total replacement is needed. Recent temperatures have made finding a solution an immediate issue.

Heckbert said the portable air conditioners and fans they’re using right now just aren’t powerful enough to cool the 15,000 square foot space — in part because of the industrial fridges used for the food bank operations in the building, which emit heat.

Under the terms of their lease, Operation Come Home is responsible for the unit, he said.

The organization, which spends most of its funding on programming rather than capital costs, has launched a new campaign to raise $60,000 to replace the unit, but the money’s only part of the problem.

“Everything takes longer right now,” Heckbert said. “We’ve been told that a new air conditioning unit might be as much as 20 weeks away, between now and the install, [and] obviously that takes us well past the summer.”

He said the $60,000 includes the cost of the unit itself, as well as installation, the rental of a crane to install it as well as permits for street closure to do the installation and getting rid of the old machine.

Heckbert said he’s hopeful a local supplier might be able to shorten that delay, but he’s preparing for the worst by seeking out more temporary hosts for programming.

That could include nearby vacant retail spaces in Centretown that could provide a cooled, safe space for youth while the work gets done, Heckbert said.